The national treasurer of the United Democratic Party (UDP), Amadou Sanneh, yesterday appeared before a three-member panel of judges of the Gambia Court of Appeal headed by Justice Emmanuel Fagbenle, and including Justice Sallah and Justice Awa Bah.

When the case was called, Lawyer Y. Mendy said she was applying to amend paragraph 7 of the grounds of appeal, which she said was an error and wanted to correct it.

DPP SH Barkhum said he was leaving it to the discretion of the court, and the judge asked the counsel for the appellant to correct it, which she did and the paragraphed was amended.

Amadou Sanneh is challenging the decision of the Special Criminal Court that convicted and sentenced him to five years in prison on 18 December 2013. It would be recalled that the state in count one accused Amadou Sanneh (National Treasurer of United Democratic Party), that sometime in September 2013 in Banjul and in diverse places in The Gambia, he conspired with others to commit an act with a seditious intention, and thereby committed an offence.

Count two stated that Amadou Sanneh (National Treasurer of United Democratic Party) sometime in September 2013, with the intent to bring hatred or contempt or excite disaffection against the person of the President of The Republic of The Gambia or the Government of The Gambia, printed a malicious document titled “ATTESTATION” on a letterhead paper of the United Democratic Party (UDP), and thereby committed an offence.

The state in count four further accused Amadou Sanneh (National Treasurer of United Democratic Party) that sometime in September 2013, he falsely made a declaration before one Bakary Baldeh, a commissioner of oaths, with knowledge that the said declaration was false and thereby committed an offence. 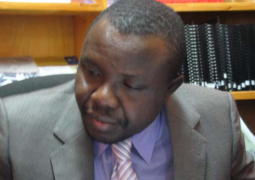