The Bundung magistrates’ court, presided over by principal magistrate Ibrahim Kijera, Wednesday dismissed the no-case-to-answer submission filed by defence lawyer Ousainou Darboe on behalf of the accused person, Lansanna Jobarteh, who was charged with the offence of broadcasting without a licence.

The trial magistrate, in delivering his ruling, began by reading the charge, which he said the accused denied.

According to the magistrate, in challenging the accused person’s plea, the prosecution paraded two witnesses, and tendered two exhibits in support of their case. He read out the evidence as laid by the prosecution witnesses, who are both NIA officers, and the exhibits tendered before the court.

The trial magistrate added that he was of the opinion that the defence of the accused person should be heard in order to do justice to the prosecution.

There was no doubt that the incident happened, and the only legal interpretational issue was whether the accused person’s act was tantamount to broadcasting without a licence.

The accused person, Lansana Jobarteh, a militant of the main opposition United Democratic Party (UDP), was charged with broadcasting without a license contrary to the Information and Communication Act 2009.

The police accused Lansana Jobarteh, that between 14 and 15 December 2013 while attending UDP political rallies at the Buffer Zone in the KMC and Brikama and diverse places, he talked on Skype using on Ipod and gave information abroad without a broadcasting licence,and thereby committed an offence. 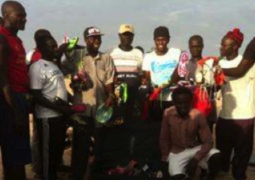