The trip of the Gambia national U-20 team to take part in the final rounds of the African U-20 qualifiers in Ivory Coast hangs in the balance owing to financial constraints, a shocking report emanating from the treasurer of the FA, Kemo Ceesay, has revealed.

The U-20 team, who are widely tipped to book a place in the continental youth championship, is scheduled to travel to Ivory Coast on Wednesday to rub shoulders with the Young Elephants of Cote d'Ivoire in the second and final rounds of the qualifiers for Libya 2011.

But a shocking news hit the headlines when the Gambia Football Association’s treasurer told reporters at the Kairaba Beach Hotel yesterday that "there is serious doubt that the team might not travel to Ivory Coast for the weekend clash in the qualifiers due to financial incapability at the FA".

"We are unable to pay the plane tickets and traveling allowances as well as the match bonuses of the U-20 players against Ivory Coast and this might force us to withdraw from the qualifiers," Ceesay, who doubles as the CEO of Rush Gambia, disclosed to reporters yesterday.

Efforts to secure an overdraft to help the team travel to Ivory Coast at the bank, according to Ceesay, proved futile given the fact that they have already reached their credit limit at the Bank.

"As I am speaking to you, there is no hope that the U-20 will travel to Ivory Coast because the GFA has no money to pay their air fairs and match bonuses, and efforts to take an overdraft at the bank proved futile because we have exhausted our credit facility," added Ceesay, who is really disturbed and concerned about the unfortunate situation.

This has added to a series of financial problems faced by the FA recently. The FA has undergone similar constraints which prompted the country's biggest football body to take an overdraft of 12,000 euros for the senior national team's training camp in Belgium recently.

"We (the GFA) are facing serious financial constraints and I can tell you that there are a lot of pending expenses including match bonuses, air fairs, and hotel bills of the senior national team players in their game against Namibia," the GFA treasurer said.

The 'Gambia for gold', a fundraising committee initiated by the Ministry of Youth and sports, has since been launched. The committee is tasked with the responsibility of raising the needed funds for the participation of all the categories of the Gambia's national teams including the qualifiers.

The U-20 team has succeeded in advancing to the final rounds of the qualifiers following a 3-1 aggregate win over Sierra Leone before beating Ivory Coast 1-nil in Banjul.

Should they travel to Ivory Coast, they will firmly set their eyes on maintaining their 1-nil advantage and possibly book a place in the championship. 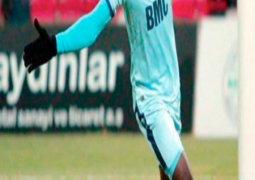