The Gambia national U17 team yesterday evening left Banjul ferry terminal for Dakar where they are expected to board a plane to Tunisia for the crucial first leg of the final rounds of the African U17 qualifiers on Saturday.

The team that endured a disappointing 1-1 draw with Senegal in a friendly match in Banjul at the weekend, travelled with 18 players and 10 officials thanks to the support of the Ministry of Youth and Sports, who provided the players allowances and match bonuses to Tunisia, according to Seedy Kinteh, GFA president, who spoke to Pointsport in his office yesterday evening.

The Gambian team, under the guidance of coach Lamin Sambou, who is in charge of the Baby Scorpions on temporal basis, progressed to the final stage of the competition after eliminating Morocco in the first round.

“The boys are very much ambitious to emulate the national U20 team’s success by qualifying to the championship proper and there is nothing to lose in Tunisia,” Sambou, who remains confident of a qualification berth, told this reporter at the GFA headquarters yesterday, a few minutes before the team left for Tunisia.

GFA boss Seedy Kinteh, who is highly positive about Gambia’s chances of advancing to the Rwanda championship, heaped praises on the Ministry of Youth and Sports for providing the team with airticket and the match bonuses for the trip to Turnisia.

He also appealed to the general public to continue supporting the team in a bid to celebrate another milestone achievement in the country’s football history following the qualification of the U20 team to the African U20 youth championship in Libya next year.

“We will put up a good fight in Tunisia and finish the job right here when Tunisia travel to Banjul in a fortnight,” the confident GFA boss told our reporter. 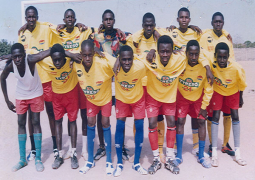