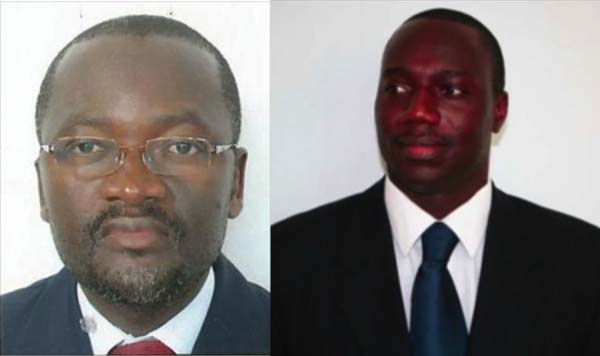 Vice President Isatou Njie Saidy Friday presided at the swearing-in of the two newest members of the cabinet, Ousman Badjie, the Minister for Transport, Works and Infrastructure, and Benjamin Roberts, the Minister for Tourism and Culture.

Mr Roberts seized the opportunity to thank his cabinet colleagues, the Vice President and President for the confidence reposed in him.

“I want to state my commitment to the developmental aspirations of this country. I know that it is not going to be easy, as there would be challenges down the road, but I equally count on the support of each cabinet minister,” the new Tourism minister said.

“I want to extend through the Vice President my sincere appreciation to His Excellency the President of The Gambia for the new confidence by appointing me to this noble office. I am conscious of the enormous task that lies ahead, and I know it would not be an easy task for me to replace somebody like Action-man,” Ousman Badjie, the new Works minister said.

In welcoming the newly-appointed ministers, Dr Abubaccar Senghore, minister for Higher Education, stated that leadership is not a privilege.

He said that they are grateful to the President as there are more than two million Gambians, and they happen to be among the ones that he had chosen to bestow trust and confidence and for this special privilege they must be grateful to him.

Aki Bayo, Minister for Lands and Traditional Rulers, also gave advise to the newly-appointed ministers, while urging them to be fully committed and dedicated to their duties.

He further advised them to work with honestly, and with loyalty to the President.

The Minister for Basic Education, Fatou Lamin Faye, advised the newly-appointed cabinet members to join the crusade to move their various agenda within their sectors, as well as the national agenda forward.

“Let us always consider that anything to do with national development that requires collective responsibility, don’t wait to be called. If you know you can participate in something that is going on make sure that you participate in it,” Minister Fatou Lamin Faye said.

Also giving his word of wisdom, the Minister for Foreign Affairs, Balla Gaba Jahumba, welcomed his new colleagues, while identifying some of the projects that he has already started working on with the new Transport and Works minister.

The Vice President, Isatou Njie Saidy, congratulated the new ministers, while highlighting some of the development that have been registered in both sectors since the 22nd July Revolution. She also said that “when the President chooses you, he must have confidence in you because there are many that he could have been chosen from, but as a result of that confidence to deliver you are sworn in.

“I have no doubt in my mind that you will deliver to the oath that you sworn in. We should try as much as possible to keep us together so that it would guide us,” the VP said.

How money flowed to Yahya Jammeh