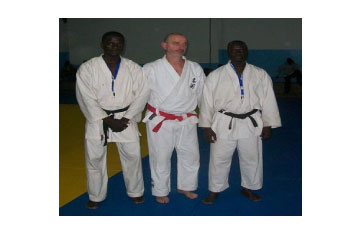 The technical director of the Gambia Karate Association and the public relations officer of the Gambia Kung-Fu Association recently returned to Banjul after the end of a five-day training in martial art, called Juit-Jusu, in Senegal, Pointsport can reveal.

Muhammed Camara and Ebou Sanyang (aka Jet Li) attended the training under the directive of a martial art master from Italy.

The Gambia martial art duo described the training course as important given the fact that it was a learning opportunity for them which availed them the unique opportunity to learn new techniques and fighting system in Juit-Jusu.

“Our aim is to bring Juit-Jusu in The Gambia and this is why we were in Dakar, Senegal, to learn lessons on it with the big masters from Europe who were also in Senegal thanks to the invitation of the newly founded Senegalese Juit-Jusu federation,” said Ebou Sanyang, a representative of the Gambia Martial Art Federation, who has undergone a series of similar international training course in recent years.

The training, according to officials of the Gambian delegation to Dakar, was attended by a host of high-profile Senegalese martial art masters drawn from different martial art clubs across the country.

Also in attendance at the training was the three-time European martial art champion, Mr Pascal.

All the Gambian representatives bagged certificates and medals at the end of the five-day training and have vowed to share the knowledge gained from the training with their fellow Gambian martial art demonstrators in The Gambia.

They also expressed “great satisfaction” for participating in the high-profiled training on Juit-Jusu.