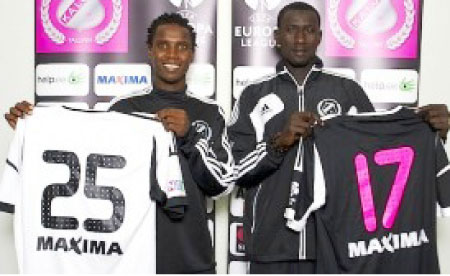 Cole has been signed for a period of 3 and a half-year contract while, Cham’s contract initially doubled, stated the club website.

They players are yet to debut for the Gambia national first team but Cole is a former Gambian U-17 and U-20 national team player.

“My first impression is very positive club, everyone is friendly and helpful. I also liked the first training. The club is very professional, and already I can not wait to play!” said 23-year-old Cole, who already made his debut for the Kalju on Monday during the club’s 1-0 win over Trans as a second-half substitute. The team is top on the Meistriliiga table with 56 points in 21 matches.

Gambian Yankuba Ceesay, who signed for the side earlier this year, is among others said to be the main man in the club’s improvement this season. This is why his countrymen came to the attention of the club’s recommendation, according to the club’s website.

He has made 9 appearances scoring two goals.