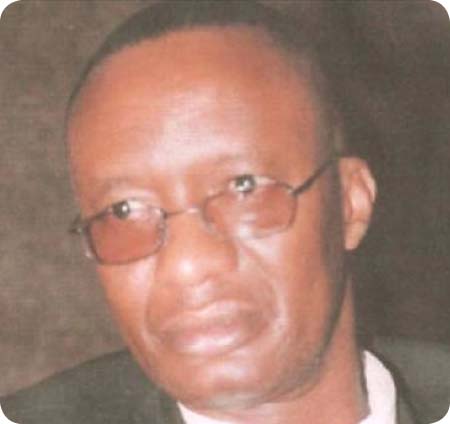 In yet another show of his philanthropist gesture, businessman Momodou Turo Darboe, who also doubles as Chief Executive Officer of Vision Development Foundation (VDF), last Monday gave a total of 2113 rams to needy Muslims across the country in observance of the Muslim feast of Tobaski.

The gesture, an annual largesse, is geared towards helping needy Muslims to meet the most important rite of the annual Tobaski feast.

It comes barely two months after the Fajikunda-based business tycoon gave out a total of 63 bulls to Muslims across the country, for the observance of Laylat Al Qadr (The Night of Power) and the feast of Koriteh marking the end of the Holy month of Ramadan.

Hundreds of people, including the young and old, women and children, joined queues at his Churchill’s Town office to take home a ram.

At the Banjul office of VDF, a good number of students are currently benefiting from scholarships, all thanks to his generosity.

This is not the first time he is extending a hand of support to the less fortunate in society, as he have been giving rams to Muslims for Tobaski for the past 20 years.

Speaking in an interview with this reporter, Momodou Manta Jallow, coordinator of the VDF said the gesture has become a tradition for Turo Darboe through the foundation to reach out to the poor and needy Muslims within and outside of the country.

According to him, the year 2013 has not been an easy year, but the CEO of the foundation felt very uncomfortable to see poor and needy Muslims struggling for survival and, as a result, he was able to put his resources together to give a total of 2113 to Muslims across the country.

The gesture, Jallow said, has been well appreciated in the sense that many Muslims people were desperately in need of rams for the Tobaski.

‘‘At a time when every Muslim was in need of a ram for the Tobaski, Turo Darboe yet again demonstrated his philanthropic nature and commitment to helping the poor and needy to rescue thousands of people. We cannot reward him much, but God the Almighty will reward him for his good deeds,’’ he stated.

Jallow went on to call on other rich people to emulate Turo’s gesture, noting that if people like Turo Darboe are many, then nobody will be hungry in the country.

‘‘Looking at the price of a ram this year which is very expensive, Darboe went ahead to give out rams to people free of charge. This goes to attest to the fact that he is indeed an ardent Muslim, who has the poor and the needy at heart,’’ he stated.

He noted that under the leadership of Turo Darboe, Vision Development Foundation will continue to support the poor and the needy, as they have been doing over the past 20 years.

Modou Lamin Jagne, senior programme officer at VDF, described this year’s gesture by Turo Darboe as unprecedented, noting that the gesture has rescued many poor and needy people at a time when they needed it most.

According to him, the gesture is not a surprise to him and many others, as Turo Darboe has been doing similar gestures over the past 20 years, something he inherited from his late father.

Jagne revealed that VDF through its CEO has been reaching out to the poor and the needy, rendering various forms of assistance that have no boundary, and the latest gesture is a continuation of that.

Highlighting some of the development activities of the foundation, Jagne stated that the VDF has over the years embarked on road rehabilitation, scholarships to deserving students, as well as assistance to Muslims and mosques across the country.

One Bilo Bah, a frequent beneficiary of Turo Darboe’s gesture, commended the Vision Development Foundation under the leadership of Turo Darboe for his contribution to the alleviation of poverty in the country.

‘‘Every year, this is the place where I used to get my ram for Tobaski,’’ he said, adding that this year’s gesture is one that has taken so many people by surprise because of the huge number of rams given out to the poor and the needy.

Ousman Kolley, another beneficiary, described the gesture as very timely, noting that it came to him as a big surprise.

“All we need to do is to pray for his good health and long life,” he said.

Outass Kebba Jobe, Imam of Churchills Town, who led a delegation of community elders to the VDF office to thank Turo Darboe, lauded the gesture, noting that this is what Islam calls for.

‘‘We are here today to pray for Turo Darboe and all those behind him for always coming to the aid of the Muslim community, especially those most in need,’’ Imam Jobe stated.

Noting that the gesture did not come as a surprise to some of them, who knew the late father of Turo Darboe, Imam Jobe called on other philanthropists to emulate the gesture.

According to him, Turo did not only stop at giving them rams for the Tobaski but has over the years invested heavily in the mosque by renovating it and changing the mats at the mosque.

Another beneficiary, Outass Omar Jallow of Sinchu Baliya village, also lauded the gesture and commended Turo Darboe for putting smiles on the faces of thousands of people, especially during the feast of Tobaski.

Almamy Gassama, another beneficiary from Baddibou Salikene in the North Bank Region, on behalf of his village commended Turo Darboe for coming to their aid at a time when they were desperately in need of rams for the Tobaski.

He called on all those who can to emulate the gesture.

Fatou Ceesay, another beneficiary based in Latrikunda Sabiji, thanked Turo Darboe for coming to the aid of her family.

Delegation after delegation from various parts of the country on Saturday visited the offices of the Vision Development Foundation, to pray for Turo Darboe and the foundation, for the assistance they continue to render to the poor and the needy.

Man in court for careless driving

Why We Need to Value Midwives