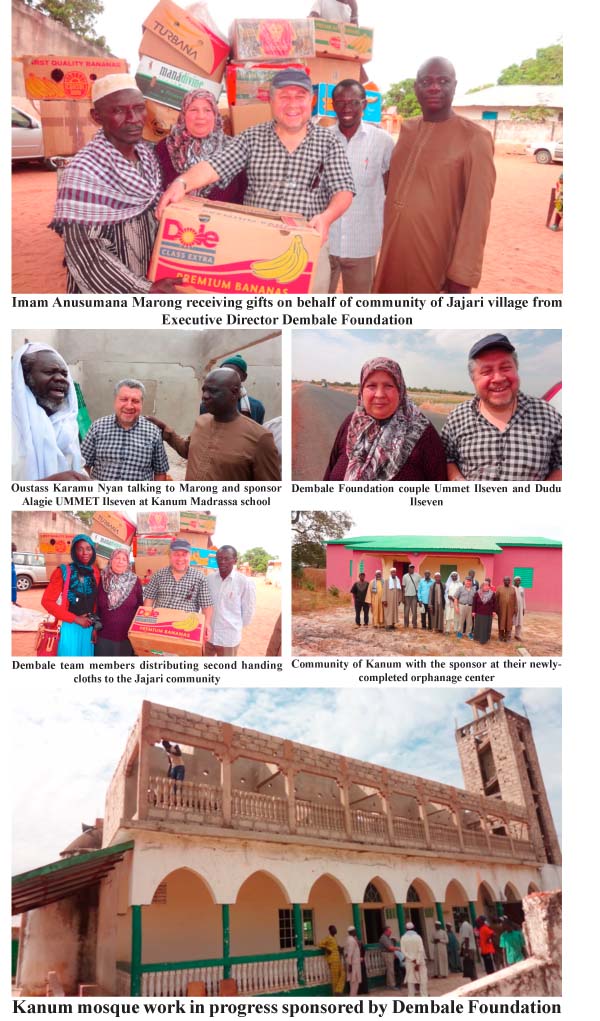 Dembale Charitable Foundation, a Turkish Muslim non-profit organisation based in Germany, on 12 January 2016 visited their project intervention sites in Kanum village in Lower Nuimi district and Jajari village in Upper Badibou district, all in the North Bank Region.

The purpose of the visit was for the team to inspect their sponsored project sites and to assess the progress of work.

The team also presented various cartons of second-hand clothes to the community of Jajari village in Upper Badibou district of the North Bank Region.

The team members included the executive director of Dembale Charitable Foundation, Alhagie Ummet ILseven, and his wife, Dudu Ilseven, Director of International Relations, and were accompanied by their Gambian counterpart, Sheriff Marong, Deputy Director of the foundation in The Gambia, as well as the public relations officer and the secretary of the foundation, Amie Faye.

The team first visited Kanum village where the foundation is currently constructing a multi-million dalasi mosque, a new Arabic madrassa school with three classroom blocks and an office, toilet and kitchen.

The foundation also sponsored the construction of a new orphanage center with fully furnished materials such as local mattresses, tap, vegetable garden, local well and installation of electricity.

The alkalo said the visit by the delegation to his village touches his heart, since the intervention of the foundation in his village had transformed the village into a developmental center.

According to the village head, he was blessed to have this foundation which is a true friend of The Gambia.

He said the village had nothing to say apart from thanking the executive director of the foundation and his family for the kind gesture, while assuring them that the village is always praying for them.

The team members were also taken on a conducted tour of the various project sites to see for themselves, and also called on the village imam, Alagie Kalilou Saidy, where they offered prayers for the foundation members.

In Jajari village, the delegation was received by Jarreh Marong, deputy imam, who thanked the team and said the village appreciated their visit.

He described Sheriff Marong as an honest person and a patriotic citizen, who is very reliable and loyal to his community.

Speaker after speaker raised concerns about the need for the foundation to help them in the expansion of the village mosque, provision of a borehole and the need for a new madrassa Arabic school.

The elders of the village emphasised the need for the foundation to help them in addressing these major issues that are really important to the village.

Most of them said without water they could not even worship the Almighty Allah, and the community praised the foundation for the love that they have for humanity.

“We are very grateful for the gift that your foundation has given to our community.We will continue to pray for long life and for the continued support to bring more for the Gambian people in particular,” they said.

In responding to the concerns raised by the village of Jajari, the Executive Director of Dembale charity foundation, returned gratitude and appreciation for the warm welcome accorded to him, his wife and his team members.

He said the concerns had been well noted and that the foundation could only help in providing all the necessary materials needed for the construction of the mosque such as cement, nails, as well as provided a borehole.

He said the labour work is the sole responsibility of the villagers, who should look for their own carpenter, mason and pay him for the services.

He promised them that some materials would be taken to the village soon, and also some food items, among others, would be given to the community of Jajari.