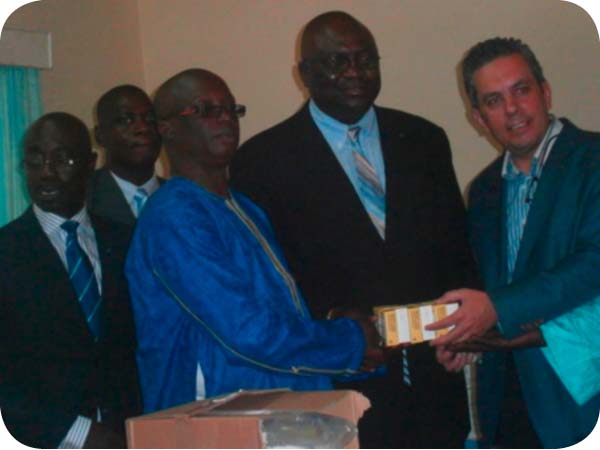 Speaking at the presentation, the general manager of banking at Trust Bank Gambia Limited, Oreme Joiner, said the development marked the beginning of a historic relationship Trust Bank is passionately committed to, by meaningfully contributing to uplifting the standards of healthcare delivery of the health facility.

He said Tanka Tanka Psychiatric Hospital, a department under the Edward Francis Small Teaching Hospital, is home to mentally challenged persons who are fathers, mothers, sisters, brothers and sons.

“These patients need our support, love and care for their recovery process, either at home or at the hospital,” Mr Joiner said.

“It is for this reason that we Trust Bank will continue to commit our time, energy and resources to the promotion of quality health care delivery system in The Gambia.”

As a  bank that prides itself with its being  Gambian, they would not relent in their effort to commit financial, material and moral assistance in supporting meaningful  projects and institutions for the betterment of the general public, he said.

According to GM Joiner, since their inception in 1997, the bank has been committed to supporting the health sector, which has been felt and seen in almost all regions of the country.

Over the years, he added, the bank had injected millions of dalasi into some major health facilities in the country, such as annual donation to AFPRC  Hospital  in Farafenni, Basse Health Centre, Brikama Centre, Gunjur Health Centre, Leman Street Clinic in Banjul and most recently, the donation of 10 new computers to the Sulayman Junkung Hospital in Bwiam to facilitate the newly launched community-based medical  programme being pioneered by the Cuban Medical practitioners, and the refurbishment and transformation of the Sanatorium from a state of “despair to a modern” health facility.

“We are witnessing yet another donation of significant collection of medication, sporting materials and completed refurbished work to some parts of the Tanka Tanka Psychiatric Hospital,” he said.

“This gesture further shows our resolve in decentralizing our support to the heath sector.”

He added: “We at Trust Bank are very delighted to present these materials amounting to D250,000, which will be used to purchase medication for the patients, purchasing of satellite TV System, second-hand clothing, stereo system, cleaning materials, the construction of bugler proofing for the female ward and the refurbishment of the toilet facilities.”

As a Gambian Bank, they would like to assure all and sundry of their continued support in any meaningful endeavour that would draw the public attention to Tanka Tanka, an important facility which needs resources and support to meet international standard, Mr Joiner stated.

This would significantly contribute to the recovery process of the patients and for their eventual return to their respective communities to enable them contribute to national development, he stated.

The general manger also underscored and recognised the tremendous efforts of the health ministry and the stakeholders in the national pursuit for a quality healthcare delivery in hospital.

He also reaffirmed the bank’s commitment to partner with the government and other stakeholders to fulfil their roles in the key areas of health, education, environment and sport.

Presentation of these valuable materials has shown the bank’s commitment to quality healthcare services in health facilities, which further demonstrated their continued resolve and strengthened their partnership with the Ministry of Health in a bid to providing quality healthcare delivery for development, he said.

He added that the presentation would not have been realised without the tireless commitment of the staff of the hospital headed by a well-committed and dedicated young Gambian, Mr Baba Manneh and team of staff.

He also expressed thanks to Mr Babucarr Cham, Managing Director of City Limit Radio, who he said had spent wealth of time, resources and energy to facilitate the project to successful completion.

In receiving the items, the Minister of Health and Social Welfare, Hon Omar Sey, commended Trust Bank for giving its heart also to the health sector.

He extended special thanks to the bank’s managing director and his team for their vision and readiness to always serve the health sector in particularly.

The donation, he noted, was a clear indication of Trust Bank’s concern and involvement in the health sector.

Chief Medical Director Dr Muhammed Ammar AL-Jafari thanked TBL for the support, saying health should be a concern to all, and that “the renovation of the toilet and the bugler proofs are indeed very important”.

Anna Bowman, the woman behind the establishment of Tanka-Tanka, said that upon her coming to The Gambia, she visited the camps and was sad about the state of affairs surrounding the mentally challenged or imbalance hence she deemed it necessary to establish the Tanka Tanka Hospital for them to have better environment.

She commended Trust Bank for the kind gesture, saying it was a big trust bestowed on them to give a helping hand to Tanka Tanka Hospital.

She assured Trust Bank of a continued and fraternal relationship between both of them that would continue to go from strength to strength in the best interest of the patients.

She thanked abundantly the Trust Bank family and all those that contributed to realising the invaluable and humanitarian support to Tank Tanka Hospital.