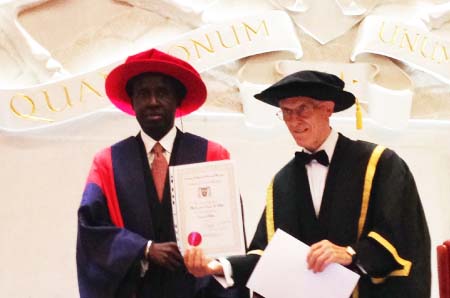 Mr Pa Macoumba Njie, Managing Director of Trust Bank Ltd, The Gambia, was awarded an Honorary Doctor of Philosophy (PhD) degree in Banking and Financial Management by the Institute of Professional Financial Managers through The Irish University Business School.

The conferment ceremony was held at the Chelsea and Kensington Town Hall on Saturday 12th October 2013 and Mr Njie attended the ceremony to receive this prestigious award himself.

In his acceptance speech, Mr Njie first of all thanked the 2 institutions for the award and commended them for the pivotal role they are playing around the world and Africa in particular in making education, especially tertiary education, affordable, relevant and accessible.

He further singled out colleagues, family and friends as important groups of people who have contributed immensely to the successes that have triggered such an accolade. He however, reserved special praise and gratitude to the customers of Trust Bank whose support over the years has helped the bank maintain its number one position in The Gambia and has contributed the most in keeping Trust Bank’s name and brand in the market’s consciousness.

A good part of his speech dwelled on the reasons he believes led to him receiving this award.

“Through the concerted efforts of our dedicated staff, a solid team, and the continued confidence of our valued customers, the bank has registered the following:

A balance sheet growth from D174 Million at inception in 1997 to over D4 Billion, representing an average yearly growth of twenty five percent.

The leading position in the Industry in terms of profitability, deposit base, loan book and balance sheet size.

A branch network that has grown from 3 in 1997 to 17 and counting, making it the Bank with the largest network in The Gambia.It also has 10 ATM points added to its network.

A well known social responsibility agenda. Over the last ten years alone, the Bank has spent over D28 Million in donations in support of critical sectors in the Gambian economy mostly in health and education. This represents between 3 to 5% of annual post tax profits.

Payments in excess of D600M in Corporate Taxes alone since its inception in 1997.

Largest employer in the Industry with a staff strength of 325 compared to 111 at inception.

A well known staff development and capacity building agenda. Each year, the Bank endeavours to train at least two thirds of its employees. In 2013, at least 200 out of the 325 members of its workforce have received some form of formal classroom training in addition to on the job training and attachments with Ghana Commercial Bank.

In 2005, the Bank participated in the first stock exchange cross border listing in the Country and is listed on the Ghana Stock Exchange with over 1,000 shareholders”

Mr Njie ended his acceptance speech by reiterating his belief that the award belongs not only to him but his colleagues at the bank, “I know most especially that the reason I was chosen for this award is because of what my colleagues and I at Trust Bank Ltd have achieved in the Gambian Banking Industry and I would like to humbly dedicate this award to Trust Bank Ltd. On behalf of the Bank, I accept this Honorary Degree of Doctor of Philosophy in Banking and Financial Management with humility, gratitude and pride.