As part of their contribution to education, the Trust Bank Gambia ltd. last Thursday awarded the certificates and D5,000 to ten outstanding students each from the various junior schools in the greater area. The event was held at the Corinthia Atlantic Hotel in .

The trust contribution to the education sector was boosted last year following the launch of a new package for school going children.

In his welcoming remarks, Mr. Dodou Nyang, Manager of Marketing and Sales at the Trust Bank, asserted that his bank is really proud of the outstanding students who made the excellent performance in their Gambia Basic Education Certificate Examination class of 2007. He said the President is very concerned with the issue of good education and health and the Trust Bank is among the stakeholders to strengthen the areas.

Mr. Nyang pointed out that Trust Bank is a special bank which intends to do business with people from all walks of life. He said the awardees should maintain their standards by continuing to show good performances in the various exams. He added that this is really proud time for their parents. "We, the Trust Bank, are passionately committed to the promotion of quality education as a prerequisite to national development.

In delivering his keynote address Mr. Oreme Joiner, General Manager of Banking Operation, said that the occasion marked another important day in the history of the bank, as the Excellence in the Millennium Awards recognises students for their record performances in exams.

He said his bank also wants to recognise the invaluable role played by the principal and teachers, as well as the parents and the guardians, for providing the much-needed support to these students. He said his bank's commitment to the partnership with government under the leadership of the president to fulfill their role in supporting the government in the health, education and sports sectors. He added that Trust Bank continues to make their annual donations to the schools at speech and prize giving days and convocation ceremonies.

He therefore congratulated hardworking students, teachers and parents for these awards and hoped that it will give an added impetus to them in their pursuit of academic excellence.

In her opening remarks the Secretary of State for Basic and Secondary Education, Honourable Fatou Lamin Faye, said the prestigious event has become a calendar event. Secy. Faye asserted human rights based development and demographic trends, the recognition of the key role of education is growing in countries around the world, with The Gambia being no exception.

She pointed out that educational outcomes also extend beyond individuals and national income. She said Education is a force that develops well-rounded and engaged citizens, and builds more cohesive and participatory societies. She said higher rates of basic education completion and recognition of the positive gains to be realised  from progressing to and completing secondary and tertiary-level  programs are important.

The occasion was graced by staff of Trust Bank, parents, guardians, teachers and principals. 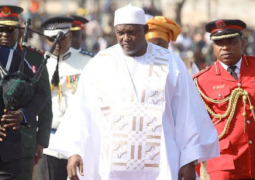