The trial for alleged murder involving two officers of the National Drug Enforcement Agency, Ebou Lowe and Eku Grant, continued yesterday at the Special Criminal Court in Banjul, presided over by Justice Ikpala.

The two NDEA officers were alleged to have beaten one Cherno Alieu Suwareh, leading to his death.

The trial continued with the cross examination of Matarr Conteh , a narcotics officer, who was arrested and charged together with the accused persons , but was discharged by the court, and is now the first prosecution witness, PW1.

Testifying under cross-examination, Matarr Conteh, a narcotics officer, told the court that he was among the officers that raided the deceased person’s house in Bakau Sanchaba, after he was suspected of drug dealing.

He said the deceased complied with them, when they searched the house, and that the 1st accused person proceeded into the bedroom, while he (the witness) searched the parlour.

Defence counsel Badou S.M. Conteh asked the witness how he managed to see the alleged scuffle between the 1st accused and the deceased, and the witness said he was not far from them, and there was no curtain (on the bedroom door).

He added that none of their members intervened in the fight, to assist the 1st accused.

PW1 adduced that after the scuffle, the search continued and suspected cannabis was discovered in the room of the deceased, wrapped in white paper.

The witness went on to say that the deceased then grabbed the substance, put it in his mouth and swallowed it.

He said the deceased only sustained brushes, and was detained at the NDEA charge office for almost a week or more.

He admitted that he was also charged, but was later discharged. 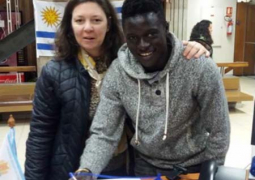