Trial commenced on Monday in the case involving one Alimatou Colley and Jerreh Kujabbi, who were charged with three counts of conspiracy to commit misdemeanor, criminal trespass and forcible retainer, at the Brikama Magistrates’Court before Magistrate Secka.

The trial commenced with the testimony of the first prosecution witness (PW1), Ingolf Buccheister.

In his testimony, Ingolf Buccheister, a Forest Ranger from Germany, said he married the accused persons’ daughter, Fatou Kujabbi, in 2003, and at that time, he was staying with them in their compound at Kafuta.

In 2004 he bought two plots of land in Kafuta, he said, adding that in 2005 he and his wife, Fatou Kujabbi, had two children who were all boys and in 2007, he constructed a house in one of the landed properties he bought and moved there with his wife.

PW1 said in December 2009, he went to Germany and he was later followed by his wife and children in March.

On 10 January 2012, his wife quit the relationship and in April 2012 he came back to The Gambia to report the matter to her parents for their support with the children, said Ingolf Buccheister.

He said he found out that the accused persons had moved into his house with their children and he was denied staying there.

PW1 adduced that he also found out that his briefcase was opened where he kept his compound documents and a cash amounting to D75,000, adding that when he asked for the contents, he was told the compound documents were sent to his wife, Fatou Kujabbi, in Germany by her mother, Alimatou Colley, and she admitted doing it but denied taking the money.

He said he had receipts to that effect and he started paying the taxes since 2003 to date, adding that the compound was measured 100mx70mx300mx80mx270m.

He explained that the original compound documents were sent by the second accused, Alimatou Colley, to her daughter in Germany.

Ingolf Buccheister added that he took the photocopied compound documents to the District chief, Bashirou Jarjou, for safekeeping when he was told by Alimatou Colley that she had sent the original copy to her daughter in Germany.

“I later went to the chief to collect the photocopied documents I left with him but I was told that they lost the documents during the renovation of their house,” he narrated.

He said that in order to prove that the particular piece of land was his, he was only left with the tax receipts.

The receipts were shown to him for identification and he identified them and they were tendered and marked as exhibits without any objection from the defence counsel, Kebba Sanyang. 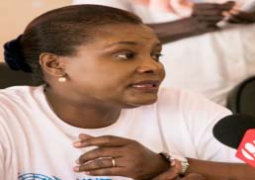 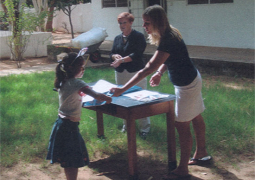