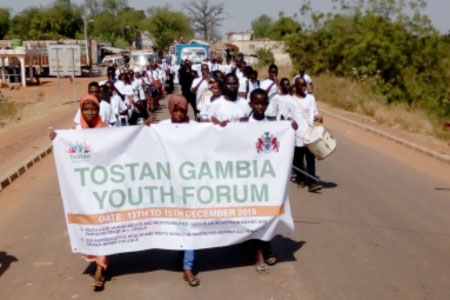 Tostan, one of the leading NGOs in the country that’s operating in the Upper River Region on Sunday concluded a historic three days youth forum that brought together more than two hundred participants.

The first ever youth forum which was organised by Tostan was meant to bring together young people within the region to discuss key issues affecting them particularly on human rights; the role of young people in peace building and child’s right among other pertaining issues.

Tostan is an international NGO that started operating in URR in 2006 with the objectives of empowering African communities by bringing about sustainable development and positive social transformations based on respect for human rights and dignity for all.

Edrisa Keita, Tostan’s national coordinator underscored the significance of the forum, saying it avails the participants the opportunity to discuss many issues affecting them as young people and table them before the government.

He said: “This is the first time we are integrating a youth forum in Tostan programmes. Tostan is an NGO that listens and learnsfrom experiences, aspirations as well as expectation from communities where we work.”

As a dynamic NGO, he added, empowerment of young people is among their objectives, hence that’s why they are organising such a historic youth forum; where participants are drown from different schools within the region.

“The is aimed at supporting them and enhance their capacities and understanding on some basic human rights issues as well as other issues that affect the live and livelihood of our youths.”

During the course of the two days, he went on, the participants were exposed on human rights, democracy, good governance, the role of youth in peace building and conflict resolution, reproductive health including gender based violence and national youth policy among others.

The Tostan Gambia boss added the young people were also exposed to Tostan’s community empowerment programme, which helps them to understand the aims and objectives of the NGO as well as its strategies.

Samba Bah, URR deputy governor, described the forum as timely and in the right direction, adding that the government can’t do it all alone, hence there’s need for partnership from all.

“Bringing more than two hundred youth to discuss on issues affecting them is important. Tostan is the kind of NGO that we need in the region and the country at large. I want to appeal to them and their donors to ensure that the youth forum even be held quarterly.”

He assured that the resolutions that the youth submitted will be forwarded to the relevant authorities.

The chairman of Basse Area Council, Foday Danjo, Majula Kuyateh from the regional health team and Muhammed Ceesay regional youth chairman all hailed Tostan for their immensely contribution to the development of URR communities.