The Minister of Finance and Economic Affairs Abdou Colley will tomorrow Friday deliver before the National Assembly the 2010 budget of the government of the Gambia for the period 1st January - 31st December 2010.

Accordingly, a news release from the National Assembly stated, members of the general public, the diplomatic and consular corp, all media houses, NGOs and Civil Society Organisations are cordially invited to attend.

"The invitation and admission tickets already issued to the general public and members of the diplomatic community are still valid for the occasion", the statement stated.

The statement however added that there are limited space in the public galleries and interested persons wishing to attend the budget speech can collect the invitation from the office of the Clerk of the National Assembly.

It also reminded all Permanent Secretaries, Managing Directors and Heads of Departments, public institutions and public servants wishing to attend to do so without further invitation as adequate reservations have been made for them in the public/civil service gallery. 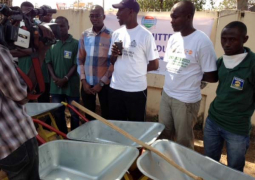