The Point has learnt through competent sources that Mr. Abdulhamid Adiamoh, Managing Editor of Today Newspaper has been charged with seditious intentions contrary to the Criminal Procedure Code.

Mr. Adiamoh, who was charged on Monday by the police in Banjul, is said to have not yet known the particulars of the charge preferred against him.

The latest developments follow Mr. Adiamoh's last week questioning by the police in connection to a story published on the front page of Today newspaper. The story was published alongside a picture of a boy of school-going age handling metal sheets in the midst of rubbish.

When contacted yesterday, Mr. Adiamoh said that he could not say exactly what the charges were but added that according to what he saw at the police headquarters, he has being charged with seditious intentions.

According to the Managing Editor, the message he was trying to send in that particular story was that children are now actually going round in search of scrap metal and that most of the time they do so during school hours.

Asked as to whether he has stopped publications, he responded that he had not been ordered by any authority to stop publication.

2 arraigned for stealing from a motor vehicle 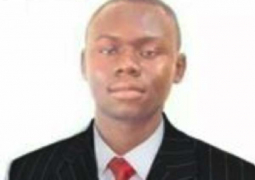