The historic events will leave an indelible mark in the hearts and minds of all and sundry, said the proprietor of Timeless Group, Lafi Touray.

Speaking at the opening ceremony, Mr Touray welcomed all those who attended the programme, saying the turnout for the events was "highly impressive".

Timeless Group, a compact enterprise of bar and restaurant, gym centre and laundry house, was registered and established as a company in 2007.

The Group’s restaurant is manned by diligent and competent chefs and cooks, who have been serving delicious, mouth-watering and delectable meals over the years at affordable prices. "And this trend shall continue," Mr Touray said.

According to him, the restaurant has a series of programmes for weekends, which include the famous Friday and Saturday nights BBQ with a live band and the daily Gambian dishes, always readily available.

Mr Touray said the company's gym and fitness centre is now opened with fully equipped state-of-the-art gym equipment for all types of workouts.

There is also a Laundry and Dry Cleaning house at Timeless Group, which started operations a couple of months ago, he said, adding: "The response we receive from our customers is very satisfactory regarding the quality of the services we render."

Mr Touray said the establishments he is putting up today were conceived ideas long time ago, to contribute in national development and job creation for Gambians.

That is why he is now investing resources in diverse and viable business activities, he says.

Mr Touray initially started the group of businesses with a real estate agency, followed by the restaurant and catering service, which is meant for locals within the locality.

He later decided to open the gym and fitness centre, followed by the laundry and dry cleaning service.

The company currently has 46 permanent staff, the industrious investor said.

Meanwhile, the winners of the mega draw include Lie Ceesay from Basse, who won the mega 4x4 Chevrolet Blaze.

The other five winners are Maria Kuyateh from Kumbija in URR, Sekou Sillah from Serrekunda, Yassin Trera from Kanifing South, Modou Gaye from Lamin and Mafu Darboe from Ebou Town. All of them won D22,000 each. 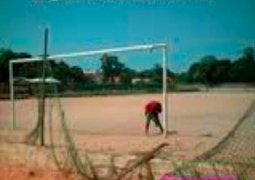