The accused persons, who pleaded not guilty of the charges, were each granted court bail of D500,000 with two Gambian sureties.

According to the charge sheet on count one, between February and March 2011, at diverse places in Fajara, in the , the first and second accused persons jointly conspired among others to commit a felony to wit stealing.

The particulars of offence on count three stated that the third accused, Robert Jandy, between February and March 2011, at Fajara and Bijilo respectively, received and retained the alleged stolen items from the first and second accused persons.

Testifying for the prosecution, Hussain Aladin, a businessman, told the court that he recognised the 1st accused, Serign Kanteh, as his staff for the past seven years through the 2nd accused, Jonas Jatta, and the 3rd accused, Robert Jandy, as employee at Elton’s main office.

He said he is the sole agent of Ardo which he used to supply to the Elton petrol stations, adding that he used to give the receipt books to the 1st accused.

He added that he also worked in the food stock of the company for fifteen years.

Hassain Aladin also told the court that on 12 April 2011, he went to his store and realised that some items had got missing and then conducted a search in the store.

According to him, he went to Elton Bijilo Supermarket where he met the 3rd accused, Robert Jandy, adding that he conducted a search there and saw some of his missing items.

Still testifying, he told the court that he reported the matter to the Kairaba Police Station, adding that he was given a police escort to go to the Elton Bijilo Supermarket but they did not meet the 3rd accused there, hence he left his mobile phone number there.

He said he then started to point out his goods to the CID officer and when he returned to his shop, the 1st and 2nd accused persons were arrested, while the 3rd accused was called by the police to come to the station.

He adduced that after the stock taking, there was some shortage and the goods found at the Bijilo Elton Supermarket were packed at one place and a statement was obtained from him. 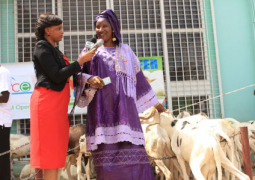