From to soldiers have suddenly developed a renewed taste for power. It hasn’t been like this for some time now.

Those of them who felt that the barracks was too restraining had to exchange their uniform for civilian clothes. They took to the civilian culture with gusto, so much so that soldiers who had never had any training in practical politics aspired to and even became the men in the driving seat of their respective countries.

Where there were exceptions, international pressures made them to announce a short transition period to a democratically-elected government. Some of these transition periods lasted for just two years.

Despite all the coups and counter coups over the years, especially in , we thought we had seen the last of the junta on the continent.

But junta leader Captain Amadou Sanogo of had different ideas. He led a coup last Thursday and toppled the government of Malian President Amadou Tumani Toure, which he accused of not giving the army enough arms to tackle an uprising by Taureg rebels.

Since that black Thursday, when democracy was cut short in , a relatively stable democratic state, the whole continent was taken by surprise.

We condemn any violent overthrow of an elected government. The trite accusation of corruption and inefficiency always played up by the soldiers, as justification for taking over power, has proved to be a bunch of bulls.

Democracy, as we know it, offers the necessary paradigms for a just and prosperous society.

Therefore, political differences should be sorted out through dialogue, compromise and reconciliation, not through the barrel of the gun.

Those who have staged a coup or planning to stage one must be made to understand that the wish of the people is supreme, and should always be allowed to assert itself.

This latest development in is a wake-up call for leaders at all levels to be on their guard for the unexpected.

A government that is genuinely committed to the needs and aspirations of the people is unlikely to be toppled, as the people themselves will chase out the military adventurers.

So the best safeguard against a putsch is good governance marked by accountability, transparency, respect for the rule of law, freedom of expression and responsibility.

“There are dragons in the wings of the World.” 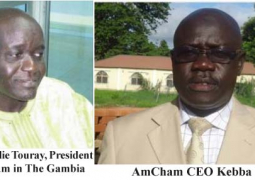