When one looks at this topic, a question may be asked, why should religious leaders be preoccupied with such a social and evil issue. The answer is that religious leaders like parents, social workers, and community elders should stand against and denounce immoral behaviors. In doing this, they will secure the lives of people, especially believers in God.

Religious leaders are called by God to be the conscience and custodians of moral norms of society. In the Bible, prophets like Moses, Isaiah, Jeremiah, Ezekiel and Amos were called by God to carry out the task of guiding and directing the conscience of society into that which God commands as good. In the first chapter of the book of Jeremiah, God called Jeremiah and said to him, “For you must go to all whom I command you. Do not be afraid of confronting them, for I am with you to rescues you”. Jer. 1:7-8.

Jeremiah, the prophet of God was empowered to preach against odds and not to fear or look into people’s eyes. God gave him the assurance of being with him to guide and protect him. from the foregoing, religious leaders by virtue of their calling have a mandate to speak in the name of God to redirect the minds and lives of people from evil to good actions.

By definition child sexual abuse and exploitation is the evil act of society by which mature adults take under aged and young people to use and abuse them for their selfish ends. Children are abused through rape, prostitution and trafficking. They are also exploited through forced labour of all kinds. All these are wrong and sinful and not to be encouraged. In the Bible, children are a progeny of two parents whom God has given the opportunity to bring them into this world. They are to be cherished as coming from God. The book of Psalms states, “Children are a gift from the Lord; they are a real blessing. The sons a man has when he is  young are like arrows in a soldier’s hand. Happy is the man who has many such arrows: Ps 127:3-5.

The Bible teaches therefore that God gives children as precious gifts to parents who are to love them, care, feed and bring up according to the good intention of God. In the Catechism of the Catholic Church, children are given to parents so that they can be loved and bought up according to the law of Jesus Christ and his Church. Children are to be given the proper environment of being trained and guided to know the good teachings of Jesus Christ so that they will live with it and be of good repute of their family and community. In an African proverb, a good is always know to be the child of the community. This proverb values children who are good because they are for the community and carry the name of the community. On the contrary a bad child cannot be for the community since he cannot identify with the community.

By way of digression I want to expound on the sexual act between man and woman according to Catholic Moral teaching. The sexual act is under this umbrella ordained by God for the procreation and begetting of children in order to establish a family. It is an act that has its main goal and objective which is to bring children in a good and God fearing family, so that humanity can be prolonged and sustained. The sexual act is not meant for commercial purposed and hence prostitution is sinful and not acceptable. The sexual abuse and exploitation of children is against what God wants and against the teachings of his church on earth.

There are many related stories centered around the topic of child sexual abuse and exploitation that are known in homes, schools, and parks. I would like to share in this paper a real story that I know about. A girl of thirteen years was given in custody of an aunty in Dakar, Senegal and she was meant to live with her aunt and husband. The girl was accepted in the house but not treated like one who belonged to the family. She was not given the chance to go to school but rather left alone in the house to clean, wash and cook meals for the family.

She lived under her hard conditions and worst of all, she was always abused sexually in secret by the aunt’s husband. There came a moment in which the girl became pregnant and was sent out of the house because she was afraid to reveal the person who was responsible. Another aunt heard of this and came to her rescue from The Gambia and brought her home. While in The Gambia, her time came for her to deliver the pregnancy but she in the process.

Until today whenever this story is narrated it brings anger over the evil of child sexual abuse and exploitation. The girl in this story called Mam Kumba, ahs been exploited through the home domestic chores and again sexually harassed and exploited and never given the chance to live for her future dreams. Our society is such that we condone the culture of silence but Religious leaders should speak out against such a culture and be part of the advocacy against silence and child sexual abuse.

Lastly, I would like to share these recommendations for Religious Leaders to affirm the existence of child sexual abuse and exploitation in The Gambia, in homes, schools and even the society.

Secondly, to be part of the advocacy and denunciation of child sexual abuse and exploitation with the Child Protection Alliance and the UNICEP Offices of The Gambia.

Thirdly, to create a forum to use the platforms of our Church sermons to preach against the evil of child sexual abuse and exploitation.

Fourthly, Religious Leaders should come together as a body to influence government through advocacy to prosecute and put in jail culprits of child sexual abuse and exploitation. 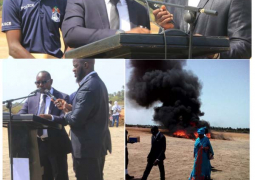