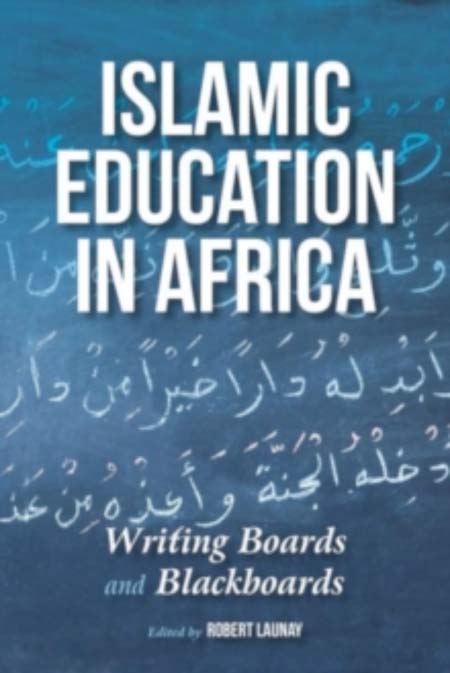 This is an academic text which comprises 15 chapters written by noted historians and theologians, all of them revisiting how Islam is taught in West Africa.

Writing boards and blackboards are emblematic of two radically different styles of education in Islam. The essays in this lively volume address various aspects of the expanding and evolving range of educational choices available to Muslims in sub-Saharan Africa. Contributors from the United States, Europe, and Africa evaluate classical Islamic education in Africa from colonial times to the present, including changes in pedagogical methods: from sitting to standing, from individual to collective learning, from recitation to analysis.

Also discussed are the differences between British, French, Belgian, and Portuguese education in Africa and between mission schools and Qur’anic schools; changes to the classical Islamic curriculum; the changing intent of Islamic education; the modernization of pedagogical styles and tools; hybrid forms of religious and secular education; the inclusion of women in Qur’anic schools; and the changing notion of what it means to be an educated person in Africa. A new view of the role of Islamic education, especially its politics and controversies in today’s age of terrorism, emerges from this broadly comparative volume.

My favourite essay is chapter 2 titled ‘Styles of Islamic Education in Mali, Guinea and Gambia’ by Tal Tamari, professor at the prestigious CNRS in Paris, and a keen and accomplished researcher on Islamic education in The Gambia. Here the author recognizes the diversity in the styles of teaching Islam in the three countries. The author identifies the variations in school schedules and holidays, For example, she relates that whilst in The Gambia the daara classes start just before sunrise, the talibes break ‘for the dawn prayers and breakfast’ (p.34) and then resume to read their lessons till afternoon. But in Mali and Guinea, she observed that the daaras hold classes in the morning from shortly after sunrise until about noon, and then again just  after the 2 pm prayers. Another interesting observation about the daaras or Islamic schools is that they generally break off from lessons from Wednesday afternoons through to Friday evenings. Meaning Thursdays are never school days as it is seen as ‘unblessed’(p.35). The author tries to give reasons that seem to influence the calendar including the priorities imposed by the farming season when the labour of the talibes is highly needed.

Significantly, the author explains on pages 36-40  that Islamic education is incremental in that one starts from and has to move from an elementary stage, to an intermediate stage until ‘advanced study’. In every stage the age of the learner matters, so does the depth and scope of the level of memorization of the Koranic suras or verses. Near the end of this very readable chapter, the author explores the contentious issue of ‘is Islamic Daara education economically exploitative?’ (p.49). Here I am sure the author is alluding to the almudo or children beggars who roam the streets of towns like Dakar sent out to collect gifts by their Koranic masters. The authors says that for the teachers, there is no exploitation because the children eat what they beg.

Another chapter worth reading is chapter 14 which profiles ‘New Muslim Public Figures in West Africa’ where the role of new age Muslim scholars like the controversial Senegal scholar turned journalist Sidy Lamine Niasse is studied. The very short biographical sketch of Sidy will interest any reader familiar with his regular outbursts in his Walf TV or in his columns in his Walf Newspaper published in Dakar since 1984.

The chapter from page 173 by the Senegal historian Cheick Anta Babou on the Murid brotherhood in Senegal is also quite revealing and well written.

As I said at the beginning, this is an academic book. Ordinary readers might find it a hard nut to crack. It is therefore, highly recommended for under-graduate and graduate students interested in the history of Islamic education in Africa, and Gambia in particular.