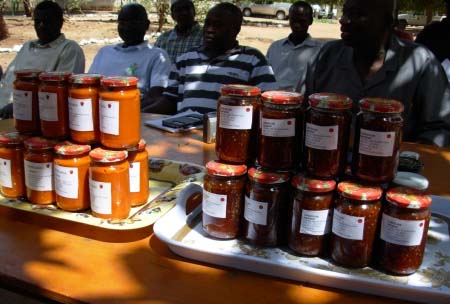 The Food and Agriculture Sector Development Project (FASDEP), in partnership with the Horticulture Technical Services of the Department of Agriculture, recently concluded a five-day training for over 40 women farmers on appropriate technologies on vegetable production with special emphasis on value chain production to marketing.

It would be recalled that the Ministry of Agriculture recently launched the Food and Agriculture Sector Development Project (FASDEP) in three beneficiary regions, namely the West Coast, Central River and Lower River Regions.

The training demonstrated its significance, as participants were well-acquainted and overwhelmed with the requisite skills and knowledge accorded them.

The training would also enhance entrepreneurial development for the participants, by encouraging and engaging them in ethical business techniques.

The participants, who represented their various communities and regions, would return to their various destinations to become Trainers of Trainers (TOT) for their people.

The deputy permanent secretary for Finance and Administration at the Ministry of Agriculture, Mr Sheriffo Bojang, assured women farmers of the ministry’s continuous commitment in ensuring the advancement of Gambian Agriculture.

Bojang made these remarks on behalf of his permanent secretary at a recently concluded five-day farmer training on the promotion of improved horticulture management practices through Farmer Field School, at the Jenoi Agricultural Rural Farmer Training Centre.

He however encouraged the participants to make good use the knowledge and skills gained from the training through practice, and extend the message to others.

Without this, he said, monies spent on the training would be of a waste.

Speaking earlier, Amie Faburay Dampha, deputy director of the Horticulture Technical Services of the Department of

Agriculture, who also doubles as training coordinator, revealed that the training was in partial fulfillment of a memorandum of understanding signed between FASDEP and the Department of Agriculture on training of FASDEP beneficiary communities on improved crop production practices for enhanced household food and income security.

Madam Dampha described capacity-building as integral in any meaningful development and therefore urged FASDEP beneficiary communities to help in ensuring many people benefit from such a training, by avoiding sending the same people to training programmes.

According to her, FASDEP will be supporting several activities, including horticulture, livestock improvement, fish farming, tidal rice irrigation and the construction of markets, among others.

He urged the participants to make good use of the knowledge gained from the training, and assured the project of his office’s unflinching support.

He commended the Government of The Gambia for its continuous support to the improvement of farmers’ livelihood.

Amie Ndure Cham from Kombo Sukuta, on behalf of the participants, hailed FASDEP for the initiative and assured them of their full commitment and support in furthering the concept of the training to the grassroots level.

The closing ceremony was characterized by presentation of certificates to participants.