It was not long ago when we stated in these pages that the number of issues pertaining to land in The Gambia is growing day by day.

We have poor coordination, false possession, and people charging high prices for what does not belong to them, to name but a few.

Whoever is to blame for the problems related to land, the reality is that genuine people who wish to invest their hard-earned money in a piece of property, are increasingly afraid to risk getting involved in land deals.

Unfortunately, the issue of land is becoming a problem in many parts of Africa; so we in Gambia are not alone in our plight.

We hear of demolitions every now and then. What are people to do? If they receive a small compensation, they cannot afford to buy a new house. If they have to build from scratch, they will find themselves and their families without a roof over their heads when the rainy season strikes. We cannot allow this to happen to any of our people.

“Men sooner forget the death of their fathers than the loss of their possessions.” 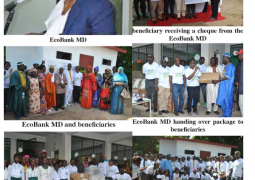