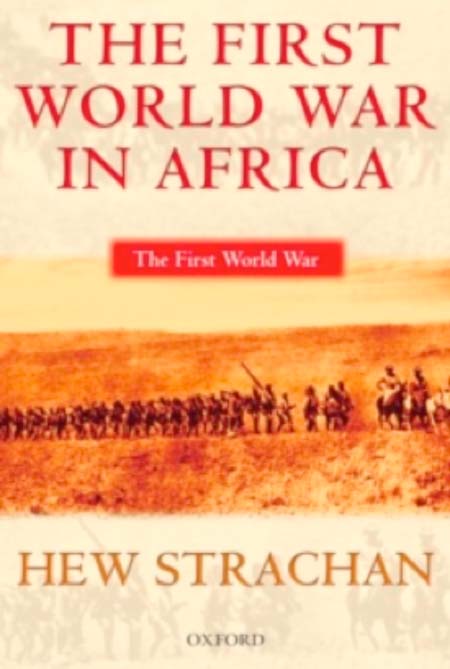 Covering events in the German colonies of Togoland, the Cameroons, South-West Africa, and East Africa, The First World War in Africa was originally a chapter of the monumental 1200 page To Arms, the first volume of a planned trilogy on WWI. In it Hew Strachan describes military operations in their broader context, rarely delving into the details of individual battles. Medicine and logistics were critical: most casualties were the result of malaria or other diseases, while even company-sized units required the support of porters in enormous numbers. Tens of thousands of Africans were employed as soldiers, but hundreds of thousands or even millions as porters.

In Togoland the only strategic goal was the wireless transmitter at Kamina, used by the Germans to communicate with ships. In the Cameroons, Entente command was “divided over three governments (including the Belgians), four governors-general, six independent commanders-in-chief, and eight column commanders” — communications between which often went via London or Paris. The Germans were led by a civilian governor whose principal goal was to maintain Germany as a colonial power and who never allowed heavy fighting to damage settlements.

The conquest of German South-West Africa was intimately tied up with the internal politics of South Africa, where an abortive Afrikaner revolt delayed the invasion. Operations were “characterized by a maximum of movement and a minimum of casualties”, with the south Africans under Botha using the railways to build up supplies for mounted flanking movements that induced German withdrawals. (In some cases the Germans abandoned positions only days before attacking Boer units would have run out of water.)

Half the volume is devoted to German East Africa. German military resistance here rested not just on the Schütztruppen, who grew to number over 3,000 Europeans and 12,000 black askaris, but on the colony’s economic, financial and medical resources. These were augmented by the arrival of two shiploads of supplies from Germany and by the salvaged guns and crew of the cruiser Königsberg. British, Indian, South African, and Belgian forces were in many ways less well resourced and prepared.

After early successes, the Germans were forced on the defensive by the arrival of large South African forces. Allied forces advancing from the north, west, and south faced logistical and medical challenges, with units reduced to a fraction of their full strength and dependent on tenuous supply chains. The Germans failed to use their interior communications to win any major battles, but kept their forces intact in a fighting retreat that took them first into Portuguese East Africa and then into Northern Rhodesia, where they surrendered on 25th November 1918.

German commander Lettow-Vorbeck is still an outstanding leader in this narrative, but Strachan debunks some of the mythology surrounding him. He continued to seek out a decisive battle and never tried to fight a genuine guerrilla war. His goal of tying up Entente troops was largely ineffectual, since South African troops were unlikely to have been deployed elsewhere. And neither in East Africa or elsewhere did the Germans make any attempt to incite revolution among the native peoples, even where they had popular support; both sides were concerned to maintain the status of Europeans.

A book review by Danny Yee

Judgment due in ex-information minister’s case