We have said it again and again that most of the roads in the Greater Banjul Area are in a deplorable state. Take that runs from Africell Junction right through Serekunda up to Churchillstown for example. It is full of potholes. And then consider the ; it isn't much different from . Cars always have a hard time of passing through these roads. The consequences are glaring enough: tyres get burst, other important parts of the cars either get worn out or damaged. As a result, only drivers with courage dare go through these roads. The upshot is that commuters are always seen jostling to get into the few available ones.

We recognise the fact that a lot of road construction has been done in recent times, especially around the Sandika in Serekunda. Ever since those roads were rehabilitated, movement of cars in and around Serekunda is much easier now. And this has even led to an increase in the number of buses plying that route. The logic is simple; good roads attract more buses. On the other hand, bad roads repel drivers and car owners. This is not good for our economy.

Talking about the economy, we have to bear in mind that the is of prime economic importance in the sense that it connects the Greater Banjul Area with some of the most important farming communities in the country. If the road is so bad that farmers find it difficult to transport their produce to town, several things can go wrong. One, the produce can go waste. Two, there will be scarcity of food. Three, prices of foodstuffs will soar beyond the reach of the average person, which will lead to malnutrition and despair among our people.

Considering the economic importance of some of these roads, we hold that no effort should be spared in repairing them. It is even imperative now that we are fast approaching the harvest season.

Aside from this consideration, it is not even good for our tourism. Our economy relies largely on proceeds from the tourism sector. It is befitting therefore to have our roads in good shape so that our tourists can go sightseeing with ease. If they have to bump through bad roads during their stay, they may be tempted not to come back.

In almost every way, these bad roads are not to the advantage of our economic well being. The sooner they are repaired, the better for all of us. 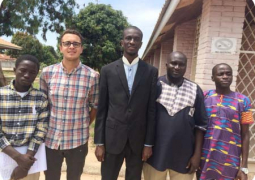