An exuberant classic belt grading was recently staged by the TEAM CHOI TAEKWONDO CLUB of the Martial Arts and , at the B.O Semega Janneh Hall.

According to the chief instructor of the Taekwondo Club Mater Basiru Choi, 18 students took part in the grading and have moved to different ranks, namely Yellow, Green and Blue.

"These students were tested one month prior to the scheduled date, according to the standards of the Kukkiwon and the World Taekwondo Federation (WTF). We made it open to show transparency and let the people know that the academy is in line with standards," said Master Choi.

Yorro Njie, the Coordinator and Programme Officer of Martial Arts of Serrekunda East Sports Development Organisation (SESDO), explained that it was a promotional test that assesses students that have been intensively pursuing four months technical TKD training programme.

"These regulations also provide the procedures of carrying out all levels of tests in accordance with the Kukkiwon (World Taekwondo Headquarters), which is aimed at spreading the rationalised Taekwondo techniques and standardising its practice in The Gambia," he stated.

He pointed out that it's what The Gambia needs if they want to rub their shoulders with the outside world in all aspects of Martial arts, particularly Taekwondo (TKD).

He appealed to the Gambia Taekwondo Association to play their part in the development of TKD and to come up with programmes and championships that will enhance the establishment of TKD in The Gambia.

Demonstrations were made by the members of the Academy like Vovinam Viet VO Dao, and Taekwondo respectively. 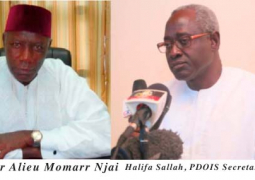