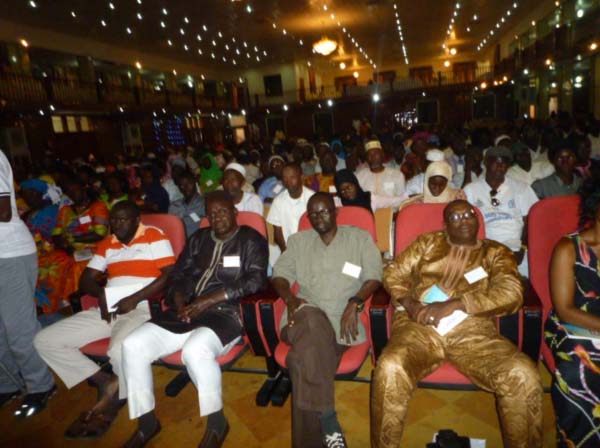 The Gambia Teachers Union Cooperative Credit Union (GTUCCU) has continued to register modest progress annually as its net assets and membership portfolio has increased sizeably in the year 2014.

This was revealed to members of the teaching fraternity over the weekend during the 8th annual general meeting (AGM) of the GTUCCU held at a local hotel in Kololi.

During the AGM, the biggest gathering and highest decision-making body of the union, members discussed the credit union’s 2014 annual report, achievements, shortfalls and challenges as well as mapped a way forward.

Speaking on the occasion, the general manager of GTUCCU, Baboucarr O. Joof, said the management and board of the credit union “never relented in their endeavour to make the union better”.

He said looking ahead through 2015 would require focus by all those in GTUCCU’s leadership as the growth and the economic realities in the environment trigger unfamiliar challenges that have to be confronted.

“As our services and product range broader, the complexities associated with operating them increase and our skills, knowledge and abilities should improve in order to perform appropriately,” Mr Joof said.

In this vein, he said the GTUCCU management continues to support staff professional development combined with appropriate human resource policies to motivate staff to become more productive, as well as retain those with potentials to add value to the credit union.

In his annual report, the chairman of the board of GTUCCU, Edrissa Bojang, said the membership of the credit union continues to benefit from the boom in teacher training at Gambia College.

“My announcement three years ago that we were engaging students newly enrolled at the college matured in 2014 and about one thousand newly qualified teachers of all categories joined our ranks,” he said.

“Those newly celebrated teachers were given the unique chance of what some of them did not enjoy after qualifying - access to loan before going on postings.”

In addition, he said there are about 3,000 students of the Gambia College under the nominal membership scheme of the GTUCCU who would over the years graduate into full membership.

She said this was due to the management’s effort to build up the cash flow to invest in more revenue generating products like fixed deposit investment which builds up reserves for the credit union.

The president of Gambia Teachers Union (GTU), Martin Gomez, said the AGM gives members the opportunity to critically examine the activities of the credit union, identify areas where they have done well and those they needed to improve upon.

“It was also to debate the key issues affecting the credit union, receive recommendation, and pass resolution from members with regard to improving the services being provided for members, and elect board and committee into office,” he said.

Mr Gomez also expressed hope that the AGM would live up to members’ expectations in their collective endeavour to addressing the daunting challenges that face the credit union.

According to the GTU president, the union had been able to pull thousands of people out of poverty and hunger in a short space of time.

He said they could make a difference provided that they worked together locally and nationally.