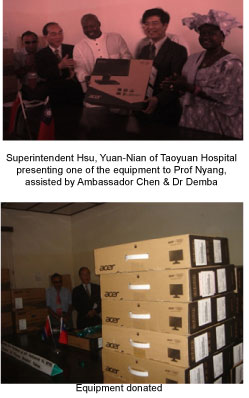 The Taoyuan General Hospital in Taiwan on 11 December 2012 donated ICT equipment to the Royal Victoria Teaching Hospital, RVTH in Banjul.

Speaking on the occasion, the chief medical director of RVTH, Professor Ousman Nyan, said ICT has been a dream for the teaching hospital for many years.

He expressed hope that the relationship between the two hospitals will go to higher heights.

“I hope we will continue to maintain this mutual beneficial relationship for the interest of our peoples,” he said, while assuring the donors that the items would be put into good use to ensure proper records keeping for the hospital.

For his part, Samuel Chen, Taiwanese ambassador to The Gambia, said health is one of the major areas of cooperation between the two countries.

According to him, the Taoyuan Hospital is a government hospital in Taiwan.

He recalled that Professor Ousman Nyang recently returned from Taiwan with lot of goodies for the country.

He said the ICT equipment donated are meant for a diabetic-care information system at the RVTH.

“Diabetics is one of the chronic diseases in The Gambia,” he said.

He said the new system will need further training for the hospital personnel and hope that should also be provided.

“This can upgrade your clinical system and promote healthcare system,” Ambassador Chen said.

Dr Adama Demba, director of Health Services, commended Taoyuan Hospital for the support it has been rendering to the RVTH.

According to her, the government of Taiwan has been very supportive of the country’s health sector in general.

These ICT equipment will go a long way in keeping the records of patients, she said.

She expressed hope that the development would eventually be replicated in other units within the health sector.

She also hailed Professor Nyan for consolidating the relationship between RVTH and Taoyuan Hospital.

Members of the hospital senior management were also in attendance, while the equipment were presented.