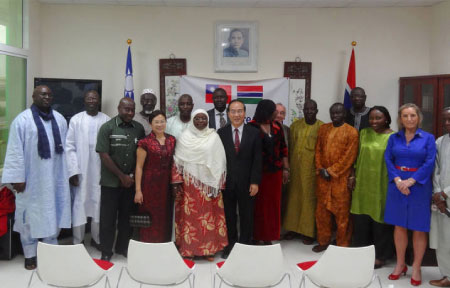 The embassy of the republic of on on 28 March 2012 opened a new culture centre in The Gambia.

Known as Taiwan Culture Centre, the hub is located at the first floor of the office building of the GNPC Kanifing Service Station.

Speaking at the inauguration ceremony, Taiwanese ambassador to The Gambia H.E. Samuel Chen said the aim of the centre is to provide the Gambian-Taiwan alumni students and the youth with an informative place to socialise and learn each other’s culture.

According to him, the centre would offer mandarin teaching, ICT classes, cultural exchange and multi-functions as an educational, social and cultural training centre.

“Culture is like the soul of human beings as it is all about the lives of the people,” Mr Chen averred.

He added: “The and are best friends and it is very important for us to know each other’s culture.”

The Taiwanese diplomat noted that the cultures of the two countries are “very different” thus the need to learn each others’ culture.

“Every year, The Gambia sends a lot of students to through various tailor-made programmes and scholarships,” he said, citing the petroleum, medical, agriculture, urban planning and ICT classes as examples of the special classes being offered to Gambians.

“A total of over 200 Gambians have so far studied in in various fields and universities,” he remarked.

Each year, Gambian students graduate in and while there “they learn the Taiwanese culture but upon their return to The Gambia they don’t have the opportunity to speak the language”.

When he presented his credentials to President Jammeh some months ago as the new Taiwanese ambassador to The Gambia, Ambassador Chen informed The Gambian leader of his wish to create a culture centre in the country.

The Gambian leader, Ambassador Chen explained, welcomed the idea and urged him to go ahead with the initiative.

“I would therefore like to thank H.E. President Jammeh for his encouragement and the government through the Ministry of Petroleum for providing us with the space to host the centre at no cost for a year,” he added.

He urged the Taiwan Alumni Association (TAA) and the public to make the best use of the centre, which will be opening from Mondays to Thursdays and Saturdays.

He expressed hope that the establishment of the culture centre would further strengthen the existing cordial bilateral relations between the two countries.

For her part, Dr Mariama Sarr Ceesay, Minister of Higher Education, thanked Ambassador Chen for the initiative of establishing a culture centre in the country.

“I really cherish The Gambia-Taiwan partnership and [the Taiwanese government’s] continued support to higher education in the country,” she said.

The benefits that could be derived from higher education are many for both the individual and as a country, which include reducing dependency and boosting employability.

“I hope the culture centre will take a positive routine in the Gambian society because Taiwanese people are very hardworking, time conscious and philanthropic,” Hon. Sarr noted.

In her vote of thanks, Kumba Conateh-NAM deputy permanent secretary, Ministry of Youth and Sports, thanked Ambassador Chen for his support to the TAA.

DPS Conateh, who also doubles as the TAA’s president, said they would endeavour to inculcate all the good things they have learnt in into the Gambians.

Adama Ceesay, the master of ceremony on the occasion, also an alumnus of , said Gambian students always feel at home while in the island country.

Mrs Ceesay said the opening of the Taiwan Culture Centre in the country has marked another milestone in the relationship between the two countries.

The inauguration of the centre was attended by the ambassador to The Gambia, French embassy’s Charge d’ Affairs, permanent secretaries, UTG vice chancellor, the mayor of , other senior government officials and a cross-section of the Taiwanese community in The Gambia.

Members of the TAA entertained the gathering with Taiwanese songs preceded by an earlier video presentation about .