The Republic of China on Taiwan through its embassy in Banjul yesterday donated a cheque for US$124, 600 to the Government of the Gambia for the health sector, at a presentation ceremony held at the office of the Secretary General and Head of the Civil Service at State House.

The money is meant for the sponsorship of seven Gambian doctors currently pursuing their post-graduate studies in .

Speaking at the handing -over ceremony, Samuel Chen, new Taiwanese ambassador to The Gambia, expressed his government’s commitment to supporting The Gambia.

According to him, the money, which is the first for him to present in his tenure as envoy to The Gambia, is geared towards supporting the Gambian medical doctors currently studying in .

Ambassador Chen stated that the cooperation between the and ranges from assistance in agriculture, health and education to infrastructure development and other support.

In receiving the cheque on behalf of the government, Dr. Njogu Bah, Secretary General and Head of the Civil Service, described the move as yet another demonstration of the excellent and cordial bilateral relations between the two countries.

Noting that has been partners to The Gambia in all its development efforts, SG Bah said the government will always continue to support the cause of and will stand by at any level.

Thanking the Taiwanese government through its ambassador, the Secretary General said this is a happy moment for the health sector.

According to him, when they return home, the seven Gambian doctors will contribute positively to the development of the health sector and The Gambia in general.

“It has all happened thanks to the Taiwanese government,” he said, adding that has been supporting The Gambia in all sectors, especially in the fields of agriculture, health and education.

SG Bah handed over the cheque to the permanent secretary, Ministry of Health and Social Welfare, Yaya Sireh Jallow, for onward transfer to the Gambian medical doctors in .

PS Jallow expressed gratitude to the Government of Taiwan for the timely gesture, describing it as humanitarian.

He assured the donors that the donated funds will reach the right people.

Who is benefiting in the AGOA equation? 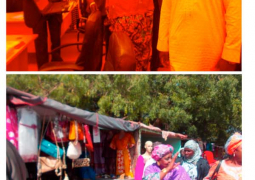