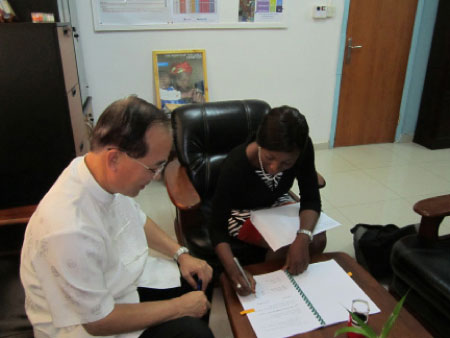 Taiwan is partnering with The Gambia to improve maternal health, a press release issued by the ROC embassy yesterday said.

An agreement on maternal health program in The Gambia for the period 2012-2015 was signed yesterday at the Ministry of Health and Social Welfare in Banjul between the two countries.

The minister of Health and Social Welfare, Ms Fatim Badjie, signed on behalf of the Gambia government while Ambassador Samuel Chen signed for Taiwan.

The program was jointly sponsored by the Taiwan International Cooperation and Development Fund (Taiwan ICDF) and the Ministry of Health and Social Welfare.

The main objective of the program is to enhance the capacity of Gambian nurses, midwives and traditional birth attendants (TBAs) in the Upper River Region so as to improve maternal health care in Basse and beyond.

According to the dispatch, Taiwan ICDF had asked the Gambia government to recommend eight nurses from Basse Health Centre to attend improved maternal health workshops in Taiwan since October 2011.

It went further to state that there will be eight more Gambians to be invited each year to attend workshops in Taiwan up to 2015.

“Taiwan ICDF and Ministry of Health and Social Welfare will co-sponsor nine classes of ‘improve maternal health program’ at Basse during 2012-2015,” it said.

The release further stated that as part of the agreement, some competent Gambian nursing and midwifery students studying in Taiwan as Taiwan ICDF scholarship recipients will be chosen to return to The Gambia every summer vocation in Taiwan to work as teaching assistants  for the nine classes of ‘improve maternal health program’ in Basse.

As part of the agreement, there will be the provision of medical equipment and supplies such as maternal health kits, monitoring of physiological functions and performance of simple tests, and emergency care and trauma care for eleven minor health centres in URR.

The program will assist eleven minor health centres in URR with planning the provision of antenatal and postnatal care and health checks, once per month on average between September 2012 and June 2015.

The focal point of the program is to achieve the Millennium Development Goals (MDGs) in the aspect of improving maternal health and reducing the infant mortality rate in The Gambia.