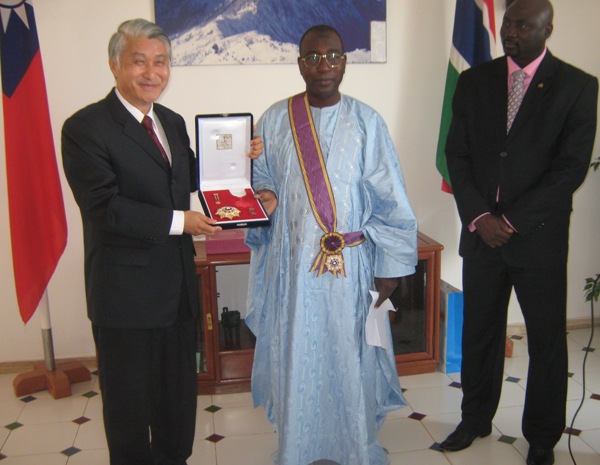 The former Gambian ambassador to the Republic of China on Taiwan, His Excellency Mawdo Juwara, was yesterday decorated by the government of Taiwan through its embassy in Banjul.

The season diplomat was honoured in recognition of his efforts in strengthening relations between the two countries.

Mr Juwara was decorated by the ambassador of the republic of China on Taiwan, Dr Richard Shih, at a ceremony held at the Taiwanese embassy in Bakau.

He is awarded with the Order of Brilliant Star with Grand Cordon.

Speaking on the occasion, the chief Taiwanese diplomat expressed his pleasure in presenting the award to Mr Juwara on behalf of his president and government. He hailed ambassador Touray for his dedication while congratulating him for receiving one of the most important medals of Taiwan.

For his part, ambassador Juwara extended gratitude to President Jammeh for giving him the opportunity to serve as The Gambia’s ambassador to Taiwan.

He also extended appreciation to the government and people of Taiwan through ambassador Shih for giving him the award.

He commended ambassador Shih for his collaboration and support to him while he was serving as The Gambia’s ambassador to Taipei.

“This is a manifestation of the excellent ties that exist between our two countries and is dedicated to President Jammeh for choosing me to serve the government and people of The Gambia,” Mr Juwara says.

He says he also enjoys his working relations with Gambian students and embassy staff in Taiwan. According to him, the natural beauty of Taiwan is enough of marvellous attraction, and praised the 23 million people of the island nation for transforming their country into an economic superpower.

Taiwan, he said, was named in 2009 as the 17th biggest economy in the world. He says that since the advent of the 2nd republic and resumption of diplomatic ties between the Gambia and Taiwan in 1995, the two countries’ relations have been fruitful based on justice, fair play and mutual understanding.

Mr Juwara also recognises the support ROC renders to the crucial sectors of the Gambian economy, such as health, education, agriculture, and infrastructure.

“The Gambia will continue to support Taiwan’s quest for more space and participation in the international arena,” he said.

“This is a clear manifestation of his efforts while in Taiwan,” he says, praising the season diplomat for serving The Gambia with “dedication and commitment”.

Family members, friends of ambassador Juwara and staff of the foreign affairs and embassy of Taiwan were present at the decoration ceremony.