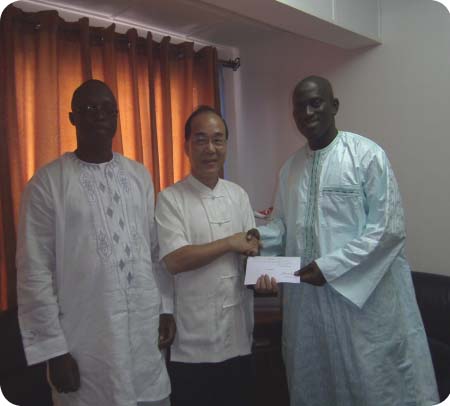 Minister of Presidential Affairs who also doubles as Secretary General and Head of the Civil Service, Hon. Momodou Sabally, on behalf of the Government of The Gambia, on 6 August 2013 received a funding of US$300,000 from H.E. Samuel Chen, Ambassador of the Republic of China (Taiwan).

The cheque was the final part payment of the US$600,000 grant allocated to the country’s health sector by ROC.

The fund is meant to assist the Gambian Government to recruit and employ medical personnel to enhance its health service. These medical personnel will be dispatched all over The Gambia to also better equip rural hospitals to provide quality medical services to the people.

Receiving the cheque, Hon. Momodou Sabally expressed his gratitude to the government and people of Taiwan, ROC, for their readiness to support The Gambia in her aim to develop the medical services.

He further stated that President Jammeh has invested a lot in the health sector, making it a priority to provide low-cost and easily accessible health care to every Gambian and the ROC (Taiwan) has been there every step of the way to support him on this noble venture.

He finally assured ROC (Taiwan), through the Ambassador, of The Gambia’s support at all times.

In his remarks, H.E. Samuel Chen said that every year the Government of the Republic of China (Taiwan) offers medical funding totalling US$600,000 to The Gambia.

“We have presented the first part payment of US$300,000, which is to cover expenses of the beneficiaries from January to June this year.Today the presentation of the fund is for the second half of the year,” he said.

According to him, they knew the health sector is very important for the Gambian people.

“It is also of high concern to H.E. Sheikh Professor Alhaji Dr Yahya A.J.J. Jammeh. My government makes this annual grant to assist The Gambia in boosting its medical services,” he said.

The presentation ceremony was also attended by deputy Permanent Secretary of the Ministry of Health and Social Welfare, Omar Sey, who promised that the fund will be put into good use.