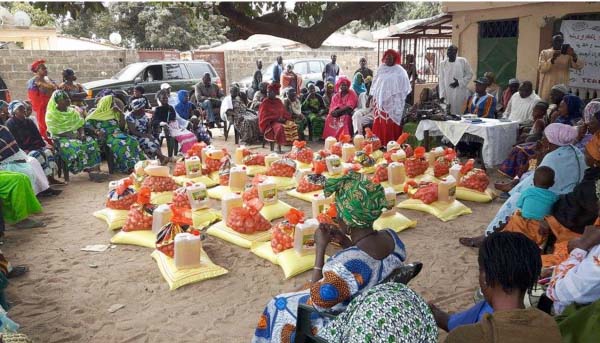 Taiba Charity Centre, in partnership with Daru Biri Society based in Dubai, at the weekend presented food items to 30 households in Bundung Six Junction.

The donated materials were 30 bags of 25kg rice, 30 gallons of cooking oil and 30 bags of onion.

Taiba Charity Centre is a non-profit organisation founded in 2009 by one Haruna M. Camara.  The organisation renders support such as provision of scholarship to needy children, building mosques and madrassas, and provision of safe drinking water to communities.

Speaking at the presentation of the Ramadan gifts, Alkalo of Bundung Six Junction, Momodou Bo Conateh, expressed appreciation to the donors saying the gifts came at the right time.

Imam of Bundung Six Junction said Ramadan is a month to show love to one another and there is no better way of showing love than caring and sharing with the less privilege in the society.

Lady Councillor Aja Amie Ndey Jatta for Bundung ward commended the community of Bundung for their cooperation and support.

Sulayman Jammeh, Taiba Centre’s relationship officer who is also the ward councillor for Bundung Six Junction, lauded the organisation for “the worthwhile gesture”.

He noted that the donation would improve the lives of the people in his ward.

He said giving out food items to needy people is among the series of programmes Taiba Charity has been doing since inception, three years ago.

Councillor Jammeh said the organisation is committed to supporting the needy and vulnerable people in Bundung and The Gambia as a whole.