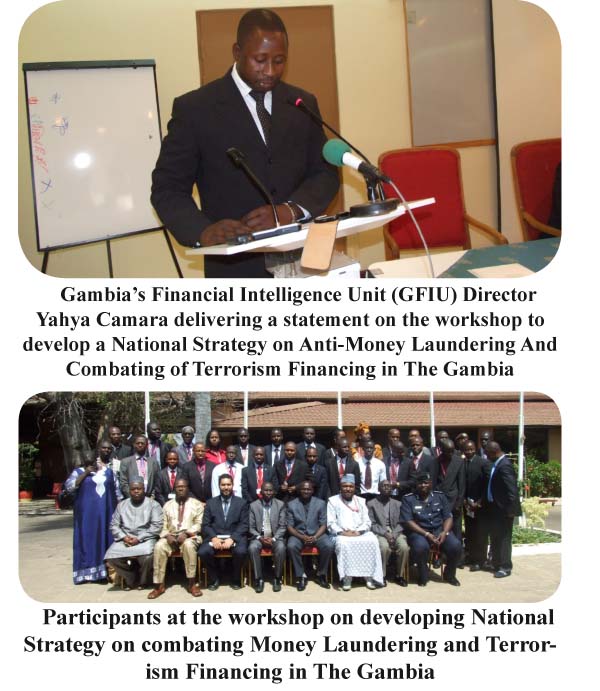 The Inter-Governmental Action Group Against Money Laundering in West Africa (GIABA) and the Gambia Financial Intelligence Unit have determinedly collaborated to put in place anti-money laundering and counter financing terrorism strategies that would prevent or frustrate the efforts of money launders and other financial criminals in The Gambia.

This involves stakeholders from the Central Bank of The Gambia, commercial banks, finance, interior and justice ministries, real estate industry, the Gambia Police Force, the immigration department and other relevant sectors.

Here, following, is a speech delivered by the Gambia’s Financial Intelligence Unit (GFIU) Director Yahya Camara on the occasion held yesterday at the Kairaba Beach in Senegambia.

On behalf of The Gambia’s Financial Intelligence Unit (GFIU) and key national institutions for the fight against Money Laundering, Terrorism Financing and Other Criminal Conducts, I wish to extend my heartfelt greetings to you and warmly welcome you to the opening ceremony of National Workshop for the development of an Anti-Money Laundering and Combating of Terrorism Financing Strategy for The Gambia.

The National Anti-Money Laundering and Terrorism Financing Strategy is one of the most important documents that a country should have to drive the process of combating these menaces. The strategy will help identify strategic and specific objectives and action plans to achieve them.

I wish to express thanks and appreciation to the Intergovernmental Action Group Against Money Laundering in West Africa (GIABA) for providing this technical assistance for The Gambia. I must confess that The Gambia has benefited from series of trainings funded by GIABA. In 2012, GIABA provided an Anti-Money Laundering and Combating of Terrorism Financing Oracle Mantas Analytical Tool to help the Financial Intelligence Unit in the analysis of Suspicious Transaction Reports. In 2014, GIABA has agreed to provide technical assistance for The Gambia, to develop a National Regulation for the implementation of UN Security Council Resolutions 1267 and 1373 on terrorism and other subsequent resolutions; in addition The Gambia will benefit from series of trainings for various stakeholders in 2014; furthermore, GIABA has agreed to provide facilitators for the five training workshops planned for 2014, funded by the African Development Bank. We look forward to collaborating more with GIABA and other partners such as the African Development Bank.

•The establishment of an independent Financial Intelligence Unit, with an allocated budget to fund its operations

•The appointment of the Director of the Financial Intelligence Unit

•The receipt and analysis of suspicious transactions for investigation

•The establishment of an Inter-Ministerial Committee

•The issuance of Guidelines to reporting entities

•The creation of database for Suspicious Transaction Reports and other reports

•The examination of commercial banks on ML/TF

•The deployment of AML/CTF Analytical Software for the FIU

•The provision AML/CFT trainings to wide range of institutions

•The acquisition of funds from AfDB to support the implementation of the requirements of the AML/CTF Act 2012, just to mention a few.

Despite the achievements, there are key deficiencies which remain outstanding, thus, this workshop will help to formulate strategies to rectify them. Some of the key outstanding deficiencies include;

•The Non-Ratification of the UN International Convention for the Suppression of Terrorism Financing (New York, Convention, 1999)

•The Exclusion of Cash Transaction Reporting from AML/CTF Act 2012

•No National Regulation/Mechanism for the implementation of the requirements of the UN Security Council Resolutions 1267, 1373 & subsequent UN Resolutions

•No AML/CTF obligations on NGOs

•DNFBPs are not under appropriate supervision and regulation

•No ML/TF Risk Assessment has been conducted

•Lack of adoption of appropriate internal control measures against ML/TF

•No typology exercises conducted to determine the risks of ML / FT

•Lack of research on ML/TF

•Lack of appropriate feedback to reporting entities by the FIU

I must disclose that the fight against crimes especially, illicit drug trafficking, corruption, money laundering, terrorism financing, and all forms of crimes has received the highest political support and commitment in The Gambia. The President of the Republic of The Gambia, His Excellency Sheik Professor Alhagie Doctor Yahya AJ.J Jammeh has directed in 2012 that all deficiencies of the AML/CFT framework highlighted by GIABA be rectified. His commitment to fight crimes was further amplified in his speech at the state opening of the legislative year, held yesterday in the National Assembly grounds in Banjul.

From the innermost recesses of my heart I wish to extend my profound appreciation to the president for appointing me as Director, Financial Intelligence Unit of The Gambia. I promise to dispend my functions as Director, to implement the requirements of the Anti-Money Laundering and Combating of Terrorism Financing Act 2012. With the support of the relevant authorities, I believe that this will be done. As we strive to achieve the Millennium Development Goals, Vision 2020, the PAGE and other government development blue prints, the achievement of a robust AML/CFT regime will certainly reinforce the already existing peace and stability which is characteristic of The Gambia, the SMILING COAST.