Habibou Nyang of Sukuta village on Tuesday 16th December 2008 appears before Brikama Magistrate Court presided over by Magistrate Pa Harry Jammeh of stealing a contrary to section 252 of the criminal code cap 10 vol. laws of The Gambia.

Narrating the fact that on or about at , the accused stole 2 mobile phones value D1900, the property of Samba Bah, he pleaded guilty.

According to Sgt. Jammeh, he told the court that it happen on 20th November 2008 while the accused person went to visit Modou Camara, he said, while the accused was with Modou, he told Modou that he want to make a call to Senegal, by then Modou was not with the phone then he asked Samba for him to lend him his phone to make call.

Immediately Samba gave it to him, the accused disappear with the phone. He said there Modou went to Samba and explained to him that the accused has disappeared. The matter was then reported to the police station, a search was conducted, he was later intercepted at Kunjur PIU there he was arrested and taken to the Yundum police station were he was caution and charge and his voluntary statement were taken from him.

After given the facts the accused person was finally convicted and sentence to serve 1-month imprisonment with hard labour. 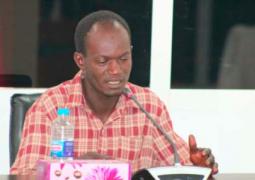