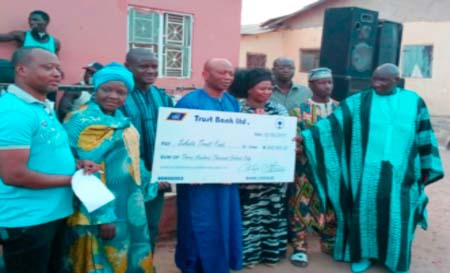 The newly launched Sukuta Diaspora Community UK chapter has provided 5,000 pound sterling, equivalent to about D300,000, to Sukuta Trust Fund for the construction of a laundry house at the Sukuta health centre.

The diaspora community was launched at the weekend in Sukuta and it was shortly after the launching that the officials presented the money to the trust fund.

Speaking on the occasion, Isha Cham, a special representative of Sukuta Diaspora Community at the launching, said they are proud to call themselves ambassadors of Sukuta for they stand for the community.

She said the donated money is to complement the government’s efforts in transforming the health centre.

Madam Cham said the second phase of the community’s help, after the laundry house, is the renovation of the Sukuta central mosque and the third phase would focus on the Sukuta market and the football field.

Horija Touray of Sukuta Trust Fund said the fund was established to help in the development of the community of Sukuta, and the donated money would go a long way in furthering that.

West Coast Region Deputy Governor Musa B Suso thanked the diaspora community for “the beautiful gesture”, saying this is what is expected of all patriotic citizens.

Suwaibou Cham, secretary general of Sukuta Trust Fund, said the donated money would be put into its intended purpose.

He called on the residents of Sukuta to also play their quota in the implementation of the project as “those in diaspora have done their part by giving us the money”.