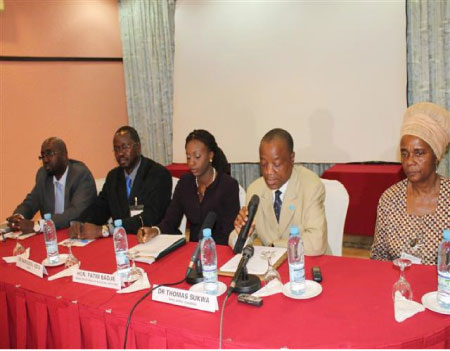 The Ministry of Health and Social Welfare, in collaboration with the Commonwealth Secretariat, the West African Health Organization (WAHO) and the World Health Organisation Africa Region (WHO or Afro), is organising a two-day sub-regional workshop on harmonizing integrated Non-Communicable Disease (NCD) in Banjul.

The forum also seeks to formulate an action plan for resource mobilization and implementation for West African Region.

The workshop, which brought together key health leaders in non-communicable diseases from Cameroon, The Gambia, Ghana, Nigeria, Sierra Leone and Liberia, is underway at the Senegambia Beach Hotel.

In delivering her welcome speech, Fatim Badjie, Minister of Health and Social Welfare, said she was very much delighted and privileged to grace the meeting.

She said that in responding to the growing attention to the global devastation caused by the NCDs, the World Health Assembly in 2000 endorsed a global strategy for the prevention and control of NCDs, which urged the WHO director-general and member states to prioritize NCD prevention and control agenda in the West African Region.

“You will agree with me that the harmonization of integrated NCD Action plans for resource mobilization and implementation will certainly facilitate effective coordination of the implementation of cost-effective and sustainable strategies in the prevention and control of NCDs in the West African Region,” she added.

According to the World Health Organisation report 2011, the NCDs account for 36 million deaths annually.

The Health Minister added that about 78 per cent of these deaths occur in middle-and low-income countries.

Dr Thomas Sukwa WHO Representative in The Gambia, said NDCs such as cardiovascular diseases, cancers, diabetes, chronic respiratory diseases, sickle cell disease and conditions like mental disorders, violence and injuries, oral diseases, and eye and ear disorders, have increasingly become significant causes of ill health in the WHO African region.

In 2010, NCDs were responsible for more than 3 million deaths representing 40 per cent of all deaths in our region.

Dr Jeannet Johnson, deputy director general of WAHO, in his statement on the occasion, said the West African Health Organization is pleased and honoured to take part, alongside the Commonwealth Secretariat and WHO or Afro, in the two-day conference.

“Today we are aware that NCDs are a double blow to socio-economic development they cause significant losses in national income, and get millions of people bogged down below the poverty line.”