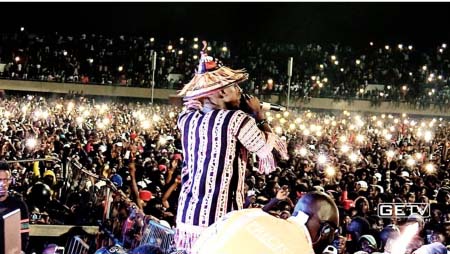 Multi-award winning afromanding artist, Sanna Singhateh aka ST or better still Brikama Boyo on Saturday made history during his Gambiana album launch, which attracted over 45,000 fans to the Independence Stadium in Bakau.

Sources close to his management hinted that efforts were even stepped-up to print additional tickets due to the high demand from outpouring crowds at the event.

As anticipated by many, the popular songster was on top of his game and delivered a scintillating performance, despite his late appearance on stage.

Earlier on, scores of Gambian artistes spiced up the event and the prominent among them includes- Lilian, Nyancho, Big Faa, Jali Madi, Attack and Jizzle as the show flowed slowly towards the early hours. The high point of the night was when the main man stepped on the stage amid ovation among the ecstatic fans.

The event drew personalities from all walks of life including Diaspora Gambians.

His playlist includes hit songs from his famous Saluto album namely- Ruhandigol Kono, Sunkutu Juba, Chorr Mama and Saluto track and hits from his latest Gambiana masterpiece-the emotional Baba La Leterro and Kodo Bay Kodo and Gambiana, which saw fans singing along, as the golden-voiced star brought the stadium down at the oversubscribed gig.

Reacting to the concert, ST told this medium; “I was very excited beyond any imagination. Seeing Gambiana creating a phenomenon by everyone dressing in the National colours was a joy to watch. The event created employment and businesses for many young entrepreneurs from ticket sales, T-shirts, Gambiana hat and the many vendors at the stadium. Special thanks to the fans for believing in our music and giving the maximum support. We need the government, and corporate entities need to support more by investing in the music industry because it can change many things for the country”.

Scores of fans who attended the event left the Independence stadium satisfied, describing ST as an exceptional performer, who will go down in history for attracting such a huge crowd.

Momodou Sabally, former secretary General and Head of Civil Service in the past government was among dignitaries who graced the event. He commented on his face book page. “Really proud of my man ST, Brikama Boyo! The #Gambiana launch was a massive success.. And lest we forget, the number 1 brand behind the nation’s number #star is Africell. The one company that has supported and nurtured Gambian talent more than any other... #InspiredNation “

“I have attended events at the Stadium and sometimes it involves international artistes, but ST’s album launch is just exceptional. Gambians are now coming up and supporting their own artistes. To think that a Gambian artiste can fill the Independence Stadium in the past must be a wishful thinking because the support was lacking. But now the trend has changed The Gambian music to the world,” says Ms. Chatty, who was among the elated crowd.

Filled with a diverse collection of songs, the ‘Gambiana’ 8-track album title speaks for itself, as it is a masterpiece that every Gambian can relate to no matter what, while reminding fans of the country’s vast cultures and traditional norms. It also takes listeners through a musical enlightenment, career growth and pure cultural vibes. 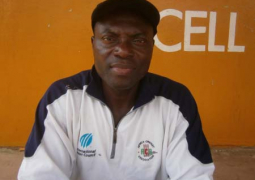