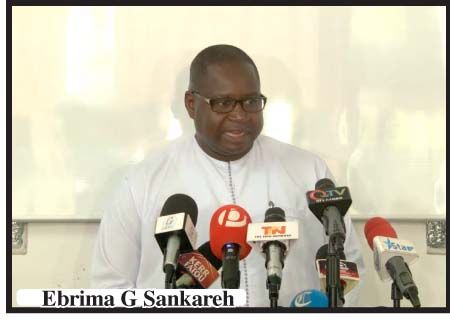 Banjul, The Gambia—Following widespread and conflicting reports alleging that President Barrow has assured his predecessor, President Yaya Jammeh, to return to The Gambia with guaranteed state protection and all privileges befitting a former Head of State, President Adama Barrow categorically refutes this report as fatally false.

Therefore, President Barrow wants Gambians and the international community to know that he is keenly following the revelations before the Truth, Reconciliation and Reparations Commissions (TRRC) and could not therefore, utter statements that may potentially be prejudicial to the Commission’s work such as his alleged promise of state protection and retirement privileges to Yaya Jammeh as the ‘false report’ purports to convey.

While President Barrow made statements about ex-President Jammeh at Berefet and Sibanorr villages in the Fonis last week, his utterances were purely hypothetical. While on his annual “Presidential Meet The People Tour”, Mr. Barrow told Gambians that even If President Jammeh were to return to The Gambia some day, he could never again be a President and could only live as an ordinary citizen and nothing else. Mr. Barrow offered no protection nor any privileges whatsoever as is being bandied around social media and some news outlets. It is totally false and very unfortunate that such a direct statement is deliberately mischaracterized for purely political reasons.

However, during the same meetings, President Barrow also alluded to conversations that transpired between him and Equatorial Guinea’s leader, President Obiang regarding ex-President Jammeh’s late mother’s burial and his (Barrow’s) magnanimity to facilitate that request.

According Mr. Barrow, even if President Jammeh’s late mom, Fatou Asombi Bojang, were to return home alive, he would have accorded her all the privileges befitting the mother of a former Head of State. Besides, the late Madam Bojang was a private citizen who never offended any Gambian and deserved nothing less than the best, President Barrow said.