Steve Biko have completed the final promotion berth to the Gambia Football Federation division one league following their 1-0 win over Young Africans in the week-eighteen fixtures played at the Serrekunda West Mini Stadium on Friday.

The Bakau giant killers followed Samger in the top tier after finishing second-place following their slender victory over the Banjul-based outfit to complete the berth to the top flight.

Striker papa Dodou Darboe’s dying-minute strike was enough to send the Bakau giant killers to the top flight following their demotion to the second tier, after their woeful performance in the top flight last season.

The Banjul-based outfit were demoted to the third tier after finishing second place from bottom in the second tier with 15 points in eighteen games.

Immigration were relegated to the third tier after finishing bottom place in the second tier with 13 points in eighteen games. 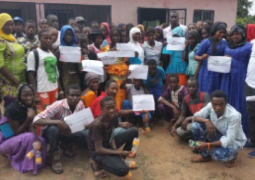 US Embassy in Gambia to fully reopen today