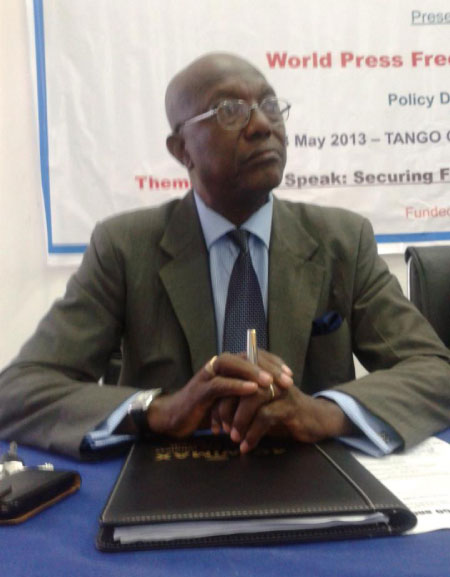 After three centuries of modern society, the newspaper (that has now grown into the generic umbrella of media) has had an intrinsic role to play in the functions of government. While the right to freely express criticism of government and governors has become a cornerstone of press freedom, civilised society has, through those centuries, endeavoured to negotiate the parameters within which each could carry out its function—one to govern and provide for the people, the other to ensure that the governors carry out the mandate to which they were sworn.

No one would say that relationship would be without pricks. It was not easy then when the first newspapers appeared in Europe, and then in America, it is not easy now that information has taken the centre stage in society, a duty made even more complex by developments in Internet technology. The Gambia, barely mastering the details of Analog science, is now having to catch up with the migration to a global ICT culture.

The Gambia can serve as a veritable laboratory for the examination of the functions of the press in its mandate to deliver quality education, information and entertainment to its people, at home and abroad. Let us therefore take a moment to put today’s dialogue under the microscope where the press has suggested the examination of the ‘role and responsibility of government in the promotion and protection of media within the framework of national development.’  You have by your choices centralised key issues: responsibility, government, media, and national development. This juxtaposition is filled with thrilling possibilities, with all our thoughts asked to converge on crucial essentials.

For government, there is already an outspoken national agenda for development. It is spelled out currently in the Programme for Accelerated Growth and Employment (PAGE), the Millennium Development Goals (MDGs), and the Vision 2020. In tandem, there is also the agenda towards sustaining a peaceful Gambia where its law-abiding people live in tolerance and respect of their diversity in language, region, and religion within secure national borders and a peaceful sub-region.

In PAGE, delivering to education and investment in vital human resources, the young and able-bodied are targeted to engage in the march towards mental and physical self-sufficiency and with the technological prowess to sustain our vision in development. There is much in evidence that government is producing results. I find a hundred headlines for articles that could have been written from the address by His Excellency the President delivered to the nation through the National Assembly in March., outlining the development agenda for the coming legislative year. The speech teemed with headline thoughts which have hardly filtered into the coverage of the national papers. Obviously, time today will not permit a listing of all of them; but a few will suffice to stress the point. (1) Can cashew become an alternative for dwindling returns on traditional crops; (2) Gambian agriculture will no longer wait for rain; (3) Eighty-eight per cent of the population now live within 5kms of a health centre; (4) Where are Gambian youth in the fishing sector where $15 million has been invested; (5) What is the repercussion on our economy when development partners poach our human resources after we had spent millions training them.

But I guess a mother in Central River Region reaching a clinic on time by donkey-cart ambulance so that she did not die of childbirth is not the kind of story that would sell newspapers. But see how important that story is to our development objectives but which goes unreported.

For me, these are development issues that should fire the imagination of an editor-in-chief. My reporters would have been out there interviewing a pregnant mother in the far-flung places to see how she covers those 5kms to the health centre and who receives her and the free medical attention she will receive. These are success stories waiting to be told so that reporting is not about waiting with mobile telephones in the newsroom for political scandal, a press release or a speech from a workshop.

In accounting for government, I’d turn the spotlight, if I may, on the media to ask it of its own role and responsible responses to the national development agenda. It is no news to you what damage is being wreaked on our country’s international image and standing at the hands of journalists.

At the Ministry of Information we see opportunity on every step to bottle the acid, lower the rhetoric and find a workable median where much progress would be achieved. We are of the view that most of the difficulties between state and press are magnified by suspicion, paranoia, and agenda. Media must demand of itself the true examination of the quality expression of its responsibility as it asks of its government. By every means, it is a two-way street.

An example we must not lose sight of passed over quietly only last week with the charge by a hasty press that the government had banned (or prohibited) the Skype and Viber Internet facilities. Consider the grave assault on the posture of the Gambia internationally with that single uproar when in actual fact the regulator PURA was taking a proactive and timely stand to stem vast revenue losses to registered GSM business and to the country by criminal individuals and cyber cafe owners offering illegal services using the facilities.

In like manner, the government moved swiftly and efficiently to allay fears and also to address cybercrime, that ever-growing danger that exposes our young and vulnerable ones to sex tourism, pornography, paedophilia, and child-trafficking through our Internet cafes. It is the business of government and press, together, to root out any evil that threatens decency and order our society.

Government is intent on broadening the scope for collaboration and is demonstrating the fact by its staunch support of training with the great strides being made at the University of The Gambia which is validating, as we speak, a curriculum, harmonised across our sub-region, for the teaching of certificate, diploma and degree courses, preparatory to the establishment of a department of journalism at the University. At last, there is a national platform for the building of the capacity of the hands and minds that will come into journalism from now on.

Why is this great news? Now we can all agree on the answer to one question that has preoccupied us for such a long time: Who is a journalist? When we firmly are resolved on that description then we want to address the next logical question: How do you auto-regulate the body so that it assumes equal dignity and respect of the Medical Council, the Bar Association and other professional players that are at the wheel of the national development agenda. That status will never be achieved if our reporters come to the newsroom for want of employment elsewhere.

Government offers open doors to help wherever it can. My Ministry remains proactive as we seek a common ground for the most respectful engagement. Whatever is stopping the press body politic from responsibly responding to that call must be examined in-house and mended. Old allegiances, hero-characters and opinions which perhaps compel younger minds to believe that aligning with government on any score whatsoever is letting down the side should be challenged for progress. The thinking that responding positively to any government overture is treachery to the fraternity, or reporting on major development markers achieved by government is “griotism” is not true.

I invite all here, especially the young and vibrant minds, to strike a new path; forge ahead with a new spirit of service and patriotism. A new road is about people’s mobility to work and back; a new hospital is about people’s health and longevity; a new bridge is about people’s and partners’ connections for trade and prosperity; new ideas and growth in agricultural output are about the national bread basket—our standard of living. Every strong measure put in place to stamp out corruption is about saving revenue for more development; rooting out apathy is about getting the nation’s engine of growth—its youth—to adopt the forward attitude that will drive the Vision.

That these are achievements of the government of the day does not make them abhorrent; they are essential to the mandate to which the government is sworn. They are to be lauded and reported on as beacons by which to judge the claims government might make of leading the country to development.

To fail in that duty is to leave us with the option of only concentrating our critical powers on politics and partisan polemics that would always leave the readership, viewership and audience of media in this country short-changed and our state and press polarised to the disastrous limits of flight of investment capital, fewer tourists, poorer imaging in the international theatre, depleting returns to the national treasury, a strain on the value of our national currency, a nervous and insecure populace, resulting in a reduced standard of living for all. How that picture of instability and social chaos in our country could ever be the outcome desired by any Gambian, at home or abroad, defeats comprehension.

I will conclude with the hope that I have shared some food for thought. And even where it was not food enough, I urge a sense of goodwill in this effort by the Ministry to forge a credible and dependable bridge between press and government. I can only ask that we all seize this great opportunity to meet our responsibilities in serving the people of The Gambia as a press that is an integral arm of government.

Let me assure all that it is safe to speak; it is not to misspeak. I would like to assure you that freedom is secured for all media; but not for freedom misused. Google Gambia and see for yourself how freedom can be misused; then sit down and consult your conscience and write responsibly about your dear country.

While my Ministry prays for the forward-looking resolutions and recommendations that will emerge, let me wish you the very best for a successful meeting and the peaceful celebration of Press Freedom Day.