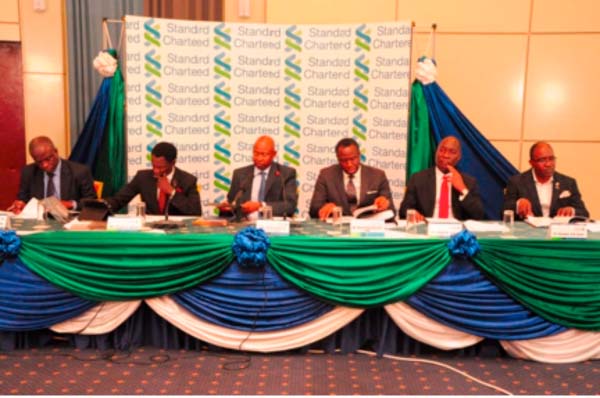 It was revealed at the AGM, attended by board members and staff of SCB, among others, that the bank made a profit before tax of D114 million in the year ended 2016.

This amount was 11 per cent higher than what was posted in 2015.

In delivering a statement, Isatou Jagne Kolley, Financial Controller at Standard Chartered Bank, said their operating income for the year under review was D526 million, a 2 per cent increase from 2015.

Mrs Jagne Kolley explained that the 21 per cent increase in non-Funded Income more than offset the 3 per cent drop in Net Interest Income that was posted.

She said SCB posted a profit before tax of D114 million, 11per cent higher than that posted in 2015.

Return on equity was 16 per cent whilst return on assets was 2.6 per cent.

She further alluded that the Balance Sheet as at end of 2016 remained highly capitalised and liquid.

Capital adequacy ratio stood at 47 per cent and liquid assets ratio was at 104 per cent, she said, adding that earning per share was 36 bututs compared to 32 bututs in 2015.

According to her, the bank has shown good progress against its strategic objectives despite the numerous economic and political headwinds they were able to see a year on year profit acceleration.