Stalwart to release new pulsating video to the world

[if gte mso 9]> Stalwart Gambia’s Reggae artiste is putting finishing touches to releasing a new video entitled “Africa for How Long”, expected to make waves across the globe.

Recorded at Sunland Records and exclusively produced by GSC Records based in the UK, the new video clip is described by Stalwart as one of his best.

Briefing Entertainment and Lifestyle on Monday, the star musician said the masterpiece is a noble call for African unity and it’s a message to Africans asking ‘For How Long Shall We be Called the Third World’ while we keep on fighting each other’.

“We should unite to make Africa a better place,” he said, adding: “The video is currently on TV, the internet and people are rating it.

“I’m currently working on my new album and I also have a link with a UK-based [entity] that is currently interested in having me on some of their rhythms and I’m hoping to work with them soon.”

The amazing young singer gifted with a unique voice that continues to earn him more fans from across thethe country also boasts of having series of songs with prominent Jamaican dancehall stars like Sizzla, Bennie Man and Black Rhino in a major compilation rhythm called “Anyweh” produced by Granite Production based in Jamaica. 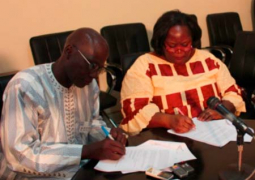