Stakeholders from the agriculture and natural resources sectors of the economy recently partook in the 6th Regional Steering Committee Meeting of the Project for Sustainable Management of Endemic Ruminant Livestock in West Africa (PROGEBE).

The meeting, which was presided by the Minister of Agriculture, Mr. Solomon Owens was held at the Paradise Suites Hotel in Kololi, with the aim of promoting the development of trypanotolerant livestock breeding on a sustainable basis.

PROGEBE is a six-year project that’s implemented in The Gambia, Guinea Conakry, Mali, and Senegal, with funding from the Global Environmental Facility (GEF), the African Development Bank (AfDB) and the governments of the participating countries.

He further noted that the region is confronted with a plethora of agricultural development challenges, among them livestock production-related constraints, which also poses significant setbacks to governments’ development efforts.

The Agriculture Minister pointed out that The Gambia has witnessed tremendous strides made by the project in dealing with some of the constraints, particularly in ruminant livestock production and productivity.

He said PROGEBE – The Gambia has registered a number of major achievements, such as the provision of infrastructure in the form of designated cattle tracks, watering facilities, livestock markets and mini-dairies for milk processing.

He thanked GEF, AfDB and the governments of the four participating countries for their foresight and willingness to invest in multi-national projects like PROGEBE.

For his part, FAO’s Resident Coordinator, Dr. Babagana Ahmadu, spoke at length on the importance of the meeting. Stating that PROGEBE is a project that aims to promote and improve livestock production, he said, the project is actively engaged in capacity-building of individual actors and institutions.

He gave assurance that his institution continuous to partner with countries towards implementing respective and joint initiatives, with a view to attaining MDGs, as they relate to poverty reduction, improved sanitation and health and environmental sustainability, among others.

Dr. Babou Ousman Jobe, acting Director General of ITC, said livestock plays a key role in the socio-economic development of the respective countries as provider of food, income and crop production resources. He then made mentioned of the constraints affecting the productivity of livestock, especially ruminants.

While stating that other aspects of husbandry are not important, he said, in general animal numbers and production would be controlled by feed supply. 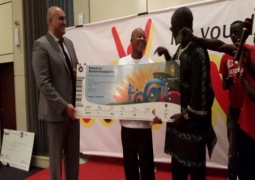