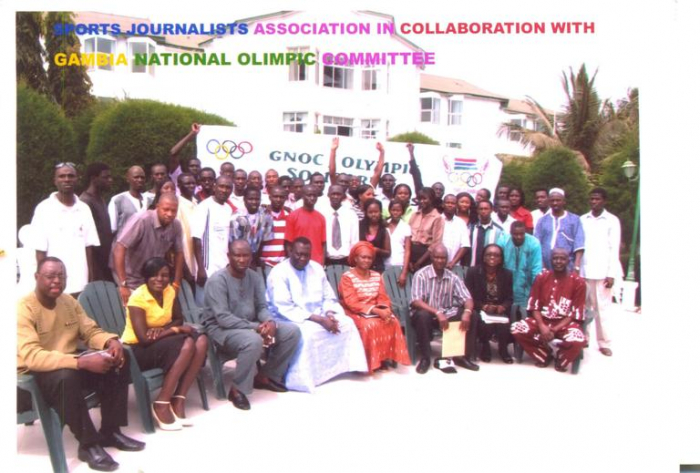 A total of 40 sports writers, presenters, as well as photo journalists drawn from all media houses across the country on Wednesday 28th April 2010, at the Paradise Suites Hotel, concluded a day-long basic sports journalism training.

Meant to build the capacity of reporters, the ultimate objective of the training which is jointly organised by the Sports Journalists Association of The Gambia, in collaboration with the Gambia National Olympic Committee under the theme "Increase prominence of women in sports," is part of activities marking the 20th edition of May Day Sports.

In her opening remarks, the acting President of the Gambia National Olympic Committee (GNOC) Beatrice Allen highlighted the importance of sports writing, given the fact that it is an important agenda in the association's programme as they have been the actors in the training.

She added that GNOC has taken women's sports very seriously, and is using the various tools and mechanisms, to sensitise all Gambians about women, sports and development.

She went on to note that staging women's sports festival is one of those mechanisms for public awareness and appreciation.

Allen, who declared the workshop open, expressed delight at the programme.

Speaking to journalists at the occasion, the Executive Director of GNOC Lawrence Bruce applauded sports journalists to associate themselves with such a high-profile training programme, adding that the training will help them build on their capacity as journalists.

He challenged the aspiring journalists to desist from bias reporting on all sporting disciplines.

"I would also like to urge you the participants to disseminate the knowledge gained from the training with their colleagues, who are not fortunate to be part of the workshop in a bid to develop sports in the country," he stated.

The honorary father of Sports Journalists Association of The Gambia, Pap Saine, who doubles as the Managing Director of the Point Newspaper commended the GNOC for their foresight in organising such training.

Saine, a globe trotting journalist who has accumulated a wealth of experience in journalism advised young reporters to always go in search of stories, dismissing the idea of expecting stories to come for reporters.