The Honourable Speaker of the National Assembly, Madam Fatoumata Jahumpa-Ceesay is the recipient of this year's Distinguished Achievement Award In Governance at the African Women Leadership Award 2009 held on at the Transcorp Hilton, .

The African Women of Influence and Leadership Awards, according to a statement from the National Assembly, recognises and honours the works of remarkable African women leaders who are pioneers of social, economic and political change in African countries and around the world.

The award, the statement added, shines the spotlight on the most enterprising, influential and impactful African female executives, business owners and community leaders, who not only have extraordinary achievements as individuals but whose work have contributed immensely to the betterment of society and inspiring countless others.

'Therefore, this award was in recognition of Speaker Jahumpa Ceesay's outstanding contributions to governance, African women development and her extraordinary achievements as a pioneer of social, economic and political change in Africa', the statement said.

The Honourable Speaker, the statement went on, has dedicated this Award to His Excellency, Prof. Dr. Aihaji Yahya A.J.J. Jammeh for under whose distinguish leadership, support for women empowerment has placed them in key government positions. "Therefore, the Honourable Speaker is greatly indebted to H.E. The President for without his support and confidence in her by appointing her to such a position; she would not have been the recipient of this award", the statement concluded. 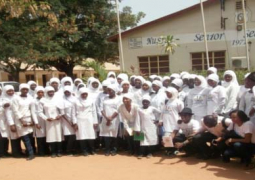 Safe Hands for Girls on national school outreach on FGM