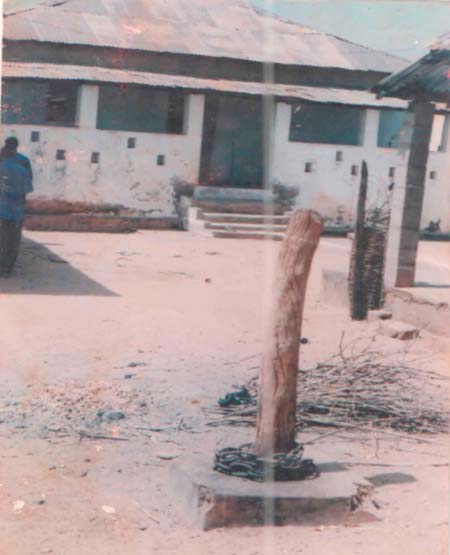 One of the most feared colonial chiefs was Sora Darboe. He became chief of Jarra East district based at Bureng in 1931 .

His father, Arafang Nfali Darboe, was chief from 1922 to 1931 when Sora replaced him. Sora had served as his deputy for a year before he assumed the chieftaincy.

He was an ex-soldier of the Gambia Company of the Royal West African Frontier Force (RWAFF). Chief Sora reportedly fought in the First World War 1914-1918. For his military experience, the British colonial officials loved him as he had the attributes of a good soldier: tough yet obedient to authority.

He was on many occasions accused of high-handed treatment of people suspected of committing crime. He chained them to a post in the middle of his compound (see photo supplied by late M. E Jammeh of UTG) in the hot sun and cold nights until they recanted or he forgave them. While other chiefs were reprimanded for such torture, chief Sora somehow always got away with it.

The British had a soft spot for chief Sora. He ran an effective District Tribunal and was known for handing down stiff sentences to criminals.

Chief Sora loved pomp and pageantry: he would always be preceded in his rare outings by a retinue of griots, staff bearers and village headmen, shouting his praise and war songs.

He launched an ambitious works project, the Bapang Bridge scheme, for increasing rice production by controlling salt intrusion. He was frequently praised in colonial reports for his ability to get his people to carry out repairs to rice causeways and bridges.

However, his detractors such as Soli Kanyi said he was using forced labour.

Chief Sora was an astute man: Jarra East had a mixed population of varying interests and occupations such as pastoralists and sedentary farmers, yet he was shrewd enough to unite the district and prevent conflict. He often spoke on behalf of Lower River chiefs at the Chiefs’ Conference; at the 1947 chiefs’ meeting at Barra, he famously lamented the fact that farmers did not fix the producer price of ground nuts, yet could not pay lower taxes even when the ground nuts price fell. The later years of his rule were marred by disputes with some of his Tribunal members and badge messengers such as Hijinki Dabo and Soli Kanyi of Jassong.  Apparently, Soli, like Sora, had wealth, fame and spiritual means and therefore also craved for power. Sora would tell Soli ‘Jarra East has one Mansa(chief) and that is me. Not you’.

The district report for Eastern Jarra in 1952 spoke of 150 tons of rice surplus produced thanks to the encouragement of chief Sora. He always discouraged his Jarra people from eating imported rice. 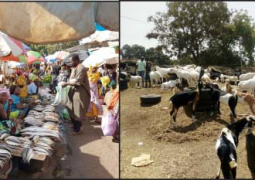