Six and One on 8 October 2013 defeated Trust Active 1-0 in a tightly-contested game in the ongoing Bakau Nawettan played at the Bakau Mini Stadium.

Both sides came into the game with the objective of bagging a victory in order to keep hopes of sealing a place in the knockout phase of the Nawettan, but the crunch tie produced few goal-scoring opportunities.

Six and One opened the score through Lamin Bojang in the 60thminute of the game from a brilliant strike after capitalizing on T. Junction’s defensive slip to give his side the lead, which eventually proved to be the winner for Six and One and also earned them a slender victory over their opponents.

Trust Active fought hard for an equalizer and created chances but to no avail, thus the game ended 1-0 in favour of Six and One, who are on the verge of qualifying for the second round of the Bakau Nawettan. 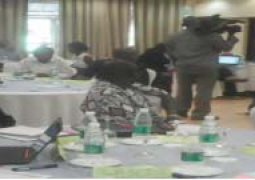